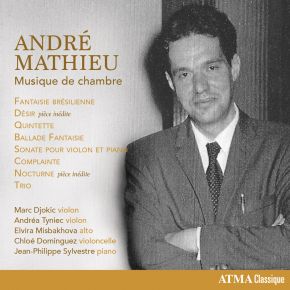 Acclaimed for her “exceptional musicality and intensity” (La Presse),violinist Andréa Tyniec has created a versatile performance career as a soloist and as a collaborator with dance, theatre and film. She is recognized as a promoter of contemporary music.

Marc Djokic is a Canadian violinist and winner of the 2017-2018 Prix Goyer. Among other distinctions he is a Prix Opus laureate and former Canada Council Instrument Bank recipient. Djokic is concertmaster of the McGill Chamber Orchestra.

Solo cellist with the McGill Chamber Orchestra and the Ensemble contemporain de Montréal , Chloé Dominguez is an ardent performer of contemporary music and, has premiered many new works as a soloist.

Jean-Philippe Sylvestre has recorded concertos by Mathieu and Rachmaninoff for ATMA Classique with the Orchestre Métropolitain de Montréal and Alain Trudel He recently performed with the Quebec Symphony Orchestra,  at the Bourgie Hall of the Montreal Museum of Fine Arts, the Montreal Place des Arts, the Auditorium Saint-Pierre-des-Cuisines in Toulouse, the Salle Cortot in Paris, and the Centre for Fine Arts in Brussels.