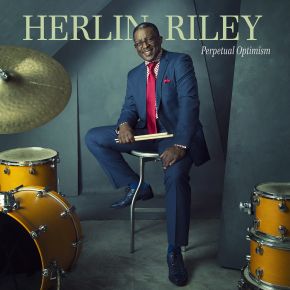 Herlin Riley’s philosophy of Perpetual Optimism doesn’t mean turning a blind eye to the more distressing aspects of life. The drummer understands that as well as anyone; beyond the standard challenges faced in daily life and the tumultuous times in which we live, he was forced to deal with the loss of both of his parents over the two years since New Direction was released. This album was made against the backdrop of serving as caregiver and then saying farewell to two of the most important people in his life.

To help maintain such an upbeat outlook during the most trying of times, Riley can count on several important sourcesof strength: his faith in God, his wife of four decades, and family of five children and 10 grandchildren; then there’s his lifelong home in New Orleans, where he remained in order to raise that family with the values and love of the music/culture that he grew up with. His roots in the church are also vital, shining through in the congregational claps that help establish the celebratory spirit that is showcased in the album opener “Rush Hour.”