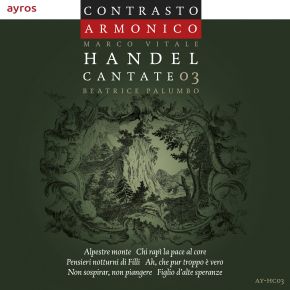 This project is the continuation of the ‘Handel Complete Cantatas’ series appeared recently on the market with four volumes issued. This is the third volume presented by the ayros recording label, as continuation of the series and it features the Italian soprano Beatrice Palumbo.

Contrasto Armonico presents here 6 cantatas, with an outstanding dramatic value and an extended palette of instrumental colors, grouped by the common theme of unrequited love.
Alpestre montre (Florence/Venice, 1709?) depicts a young man in despair over an unrequited love. The setting is a craggy, alpine forest, where dark shadows and spectres mirror the thoughts and invade the heart of an unrequited lover who says that he will only find peace in death. In the final aria, he asks only that his beloved offer a final farewell at his grave.
Chi rapì la pace (Florence, 1706) may be one of Handel’s earliest Italian works. In the movement pattern aria-recitative-aria, it depicts a similar story. The lover asks, “Who stole the peace from my heart?” and decides it was Cupid who wounded him.
Ah, che pur troppo è vero (Florence, 1707 or 1709) once again presents an unrequited lover. The difference here is that the beloved is distant rather than unresponsive, so the lover, after contemplating death, chooses to hope.
Pensieri notturni di Filli (“Nel dolce dell’oblio”) (Rome, 1707), for soprano, recorder and basso continuo, cannot be precisely dated, but the paper and layout of Handel’s score matches other works from his first year in Rome. In the text of the cantata, the singer watches Phyllis, whom he loves, as she dreams of her own beloved. Apparently, there is a chain of unreciprocated love: the narrator loves Phyllis, who loves another, who seems, alas, to love still another. The singer concludes that being deceived in a dream can have its delights, but when one awakens delight turns to sorrow.
Non sospirar (Florence, 1707 or 1709) is a continuo cantata with two recitative aria pairs. Like Chi rapì il pace, it follows the somewhat reduced pattern of aria-recitative-aria, and, once again, the singer suffers from love. In the first aria, the singer tries to suppress his sighs and tears, keeping his sadness “inside himself completely.” And, once again, Handel turns to a sharply-dotted rhythmic pattern in the bass to depict the lover’s distress,
a continuing motive in his compositional style.
Figlio d’alte speranza (Son of high hopes), set for soprano, violins, and continuo in three recitative-aria pairs, tells the story of King Abdolonymus, born to greatness, reduced to being a gardener, and restored to the throne of Sidon. Unlike the typical cantata in which the singer speaks in the first person, this story is narrated in the third person, giving it an unusual formality. Although the image of a “wheel of fortune” is never specifically mentioned in the text, Handel builds all three arias on this concept using distinct turning motives in the accompaniment of each.

Handel never published his cantatas, probably because they were written in private circumstances, but as a result they served him as a repository of inventive material throughout his life. Especially as he moved from city to city before settling for good in London, Handel chose to give his new audiences a chance to hear music he had written elsewhere.