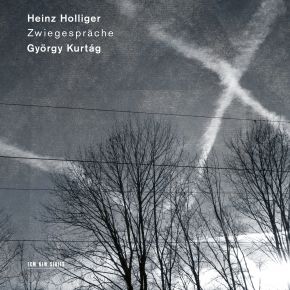 Zwiegespräche is a meeting of spirits. “We compose the same way,” said György Kurtág to Heinz Holliger on hearing this recording, which emphasises works for oboe by these two major composers. Both of them reference the entire history of music in their pieces, both incorporate dedications and messages to friends and colleagues in the fabric of their work, and both draw upon literature as an inspirational source. Both, moreover, love the miniature as an expressive form; short pieces by Kurtág and Holliger are interwoven. Holliger’s sequence Airs (2015/6) is inspired by seven texts by Swiss poet Philippe Jaccottet, whose voice is heard here. The release of Zwiegespräche is timely. Heinz Holliger turns 80 on May 21, his creativity as composer and his resourcefulness as instrumentalist undimmed. The album concludes with Holliger’s Sonate für Oboe solo, composed in 1956, and still played by its author with absolute authority.