The code is valid one time and valid for a 10 days after receiving the promotioncode. Your emailaddress will only be used by Challenge Records International and will not be given to 3rd party advertisers. If you have any questions please contact us.
TITEL CD is added to your cart.
1465818393 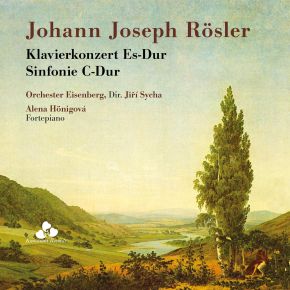 The recordings of the recently-discovered Piano Concerto in E flat major and Sinfonia in C major by Bohemian composer Johann Joseph Rösler (22 August 1771 Banská Štiavnica - 28 January 1812 Prague) bring insight into the work of an outstanding musician, who worked in Prague and Vienna at the beginning of the 19th century. Although his creative period was relatively short, he composed more than 200 works and became famous as a talented composer, virtuoso pianist, and popular Kapellmeister.

Rösler‘s name is mentioned in most 19th century dictionaries, but in the 20th century his work was almost forgotten. In addition, he was often confused with the composer Anton Rössler, called Rosetti, a Kapellmeister one generation older from Ludwigslust.

Johann Joseph Rösler grew up in Prague, the capital of the Bohemian Kingdom (part of the Habsburg monarchy) where his father, Carl Anton Rösler, held an important administrative function of Gubernialrath. ……This enthusiastic atmosphere must have been experienced by the passionate self-taught musician Johann Joseph Rösler while a student of the gymnasium and later reading philosophy at Charles University (1790-1792). His father provided him with the basics of musical education but did not support his professional ambition. Rösler did not let himself be discouraged, and his independent study of composition and piano reached such a great level that he was offered the position of a kapellmeister in 1795 at the Guardasoni Opera Company. In 1805, he accepted an invitation for the position of Kapellmeister at the Court Theatre in Vienna, and in July of that year he entered the service of one of the most important Viennese patrons of music, Prince Franz Joseph Maximilian Lobkowitz. He became a kapellmeister of the Lobkowicz Kapelle (working with Anton Wranitzky and Anton Cartellieri) and accompanied the prince even during his regular stays in his Bohemian residences: in the summer at Eisenberg (Jezeří) Castle, in autumn in Roudnitz an der Elbe (Roudnice nad Labem). Rösler also directed the premiere of his operas at the Estates Theatre. This promising career was unfortunately interrupted by disease. In 1810, the first symptoms of tuberculosis appeared, and Rösler succumbed in January 1812. Many period testimonies mention that with the death of such a gifted and prolific musician, they had also lost a kind man..(Excerpt from the Booklet)