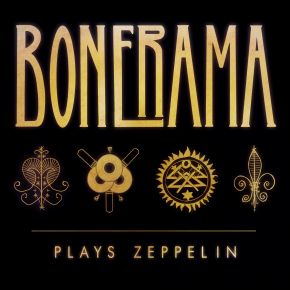 Anybody who’s been to a Bonerama live show is no stranger to the band laying down some funked-up, brassy renditions of classic rock songs. Fans of those moments are in for a treat, because the band is gifting the world an album of nothing but Led Zeppelin covers. Bonerama Plays Zeppelin is exactly what you think it is, a collection of your favorite songs from the greatest rock band of all time covered by the greatest trombone band of all time. If you have any doubt that a Trombone-centric band can really rock, pick a tune at random from this release, and be defied. Whether it be the lava-hot vocals on “Black Dog”, the distorted wah-wah trombone replacing the traditional guitar on “In My Time of Dying”, or even a surreal lightning-fast sousaphone solo on the funkified version of “Heartbreaker,” Bonerama proves they can rock with the best of them. Known the world over for its incendiary live performances, Bonerama has been bringing its specialized brand of New Orleans music to the masses for over 20 years. Bonerama is currently comprised of Mark Mullins (trombone, electric trombone and lead vocals), Craig Klein (trombone and lead vocals), Greg Hicks (trombone and vocals), Bert Cotton (guitar), Matt Perrine (sousaphone and electric bass) and Walt Lundy (drums and vocals). The album comes to you from New Orleans stalwart label, Basin Street Records, was produced by Mark Mullins, Craig Klein and Tracey Freeman, recorded at Music Shed Recording Studios in New Orleans, and features outstanding original artwork re-imagining the classic Zeppelin symbology by Molly Reeves. Buy from Basin Street Records webstore, or get a physical copy to receive the bonus track “The Ocean”! Come out for the CD release party April 19, 2019 at Tipitina’s (under new musician-owned management)! Pre-Order on iTunes or from Basin Street Records to instantly get “Good Times Bad Times!” Buy a physical CD or buy from Basin Street Records directly to receive a free download of “The Ocean.”