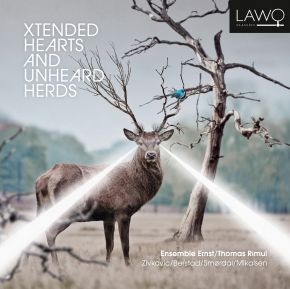 Ensemble Ernst’s “Xtended Hearts and Unheard Herds” is the second release on the LAWO Classics label by the distinguished contemporary music ensemble. This album is a continuation of their first, “... BUT …”, as they combine their own commissions with works with international appeal. Their intention is to let well-known names help Norwegian composers gain greater recognition worldwide. We hear works of the Norwegian composers Ragnhild Berstad, Jan Martin Smørdal and Jan Erik Mikalsen, together with Serbian-Swedish comoposer Djuro Zivkovic. The result is a contemporary music bag of sweets in which hopefully everyone can find a favourite.

This recording was made in Jar Church and NRK Radio Concert Hall on cold November afternoons in 2017. The recording process was a close collaboration between the ensemble, the recording company and the composers, and the result is, in our eyes, an important recording of the present for the future and for history.

Ensemble Ernst was established in 1996, an offspring of the contemporary music ensemble at the Norwegian Academy of Music. Thomas Rimul has been the conductor from the start, and most of the musicians have been members since the very beginning.

The ensemble has specialised in recent contemporary music, focusing on composers such as Beat Furrer, Salvatore Sciarrino, Jonathan Harvey, and Iannis Xenakis, as well as actively commissioning music from Norwegian composers.

The ensemble won the Fegersten Foundation’s music prize in 2004, and the Norwegian Society of Composers “Performer of the Year Award” in 2011. Together with Christian Blom and his computer-directed Al-Khowarizmis mechanical orchestra they won Spellemannprisen (Norway’s Grammy) for 2017 in the category “contemporary” for “Christian Blom — Bring me that Horizon”.