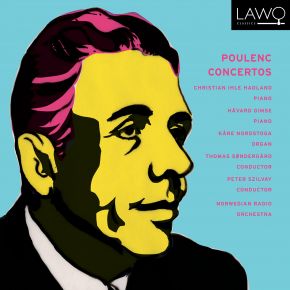 POULENC, PROPHET OF IMMEDIACY
Francis Poulenc (1899–1963) is not an easy composer to relate to. Not the man himself perhaps – though possibly that too – but his music. It is somehow dated. Here is a composer who produced his best works, all more or less completely tonal, at a time when Arnold Schoenberg was writing twelve-tone music and Poulenc’s countrymen Oliver Messiaen (1908–1992) and Pierre Boulez (1925–2016) were into innovative rhythms, scales and techniques to lift the music out of the realm of subjective emotionalism. One of Poulenc’s most splendid works, Gloria, from 1959, was composed two years after Boulez’s third piano sonata. The two works have nothing in common other than that they both consist of notes and belong to what is called the European music tradition. What’s more, I am reasonably certain that Gloria has many more listeners than the third piano sonata of Boulez, quite simply because this melodious choral work is more accessible.

And accessible was what Poulenc wanted to be. One composer he looked to as a source of inspiration was Stravinsky, especially his neoclassical works from the 1920s. Here we are talking about pieces such as Pulcinella and The Fairy’s Kiss, as well as his Octet for Wind Instruments. Poulenc has been quoted as saying that if not for Stravinsky, he might not have been a composer at all. An exaggeration to be sure, but the similarities are apparent. Both can be called neoclassicists in the sense that they adopted baroque and classical forms with clear linearity in the melody and a lucid form with an underlying tonality. But Stravinsky composed his neoclassical works in quotation marks, as the Danish music critic Hansgeorg Lenz put it. By this he meant that Stravinsky was, stylistically speaking, extremely self-assured. He played with his forms and shunned personal expression, even though we hear it is Stravinsky, no matter which compositional mask he dons. In one way or another, Poulenc is there too, but only in part. Both break with the pathos of Romantic music, with its fervor and self-expression. Yet, while Stravinsky’s style is the manifestation of a strong will — i.e. he laid bare the distance between the forms he used and the actual sound of the compositions — this distance is more difficult to discern in Poulenc. He composed largely without a mask, without distance. He became a kind of prophet of immediacy. In a way he simply wished to entertain, and now and then to shock, something most composers wanted to do in 1920s Paris. And he was at this time also one of a group of young composers known collectively as “Les Six”, for whom the French poet, filmmaker and playwright Jean Cocteau (1889–1963) was something of an ideologue and Erik Satie (1866–1925) a kind of father figure. In his book Le Coq et l’Arlequin (1918), Cocteau criticizes, among other things, the melancholy of German music (Beethoven, Wagner) and asserts that the plain and simple is concentrated complexity, i.e. depth. This fits much of Poulenc’s music with its distinct melodies, formal clarity, and not so very complicated harmonies. Poulenc emphasized that he was not a harmonic innovator; neither was he, as he said, afraid to “use other people’s chords.” This clarity of form and expression can also be found in a number of the choral works, written after Poulenc had converted back to Catholicism in the mid-1930s. Here, for example, I am thinking of the Mass in G Major (1937), Figure humaine (1943) and Stabat Mater (1950). To these can be added his operatic masterpiece, Dialogues des carmélites (1956). These are works that engage us at a deeper level than his instrumental pieces, which are often much more garrulous and concertizing. Something revealed, to a great degree, on this release.

If we include Aubade (1929) for piano and eighteen instruments, Poulenc can be said to have composed five concertos. If, however, we ignore the aforementioned Aubade, and, likewise, Concert campêtre (1928) for harpsichord and orchestra, those that are left can be found on this album. Among them, the Concerto for Organ, Strings and Timpani (1938) is considered to be the most popular of the three, and, perhaps, the most serious. It has different qualities from, for example, the piano concerto. As the composer himself joked, it showed “a Poulenc on his way to joining a monastery.” Is it perhaps a kind of Te Deum without text? In any case, Poulenc counted it among his religious works, and regarded it as one of the most important. And because he wanted to use the organ for all it was worth, he listened to many organists in Paris, especially Marcel Dupré. Poulenc’s concerto was premiered by another authority within the French organ school, Maurice Duruflé, who also helped Poulenc with the registration. For Poulenc wanted musical punch and nuance from this instrument, which is an orchestra unto itself. At the same time, he broke with the classical three-movement structure of the other two concertos on this album. The organ concerto is divided into seven parts, which blend into each other. In that respect, it resembles the multi-movement Aubade, but with more baroque associations. Music historian Paul Griffiths wonders whether the gravity of the organ concerto is explored as a possible mode of expression, or whether the seriousness is genuinely intended. Difficult to say, of course, but is it perhaps precisely this ambivalence that gives the work its strength? There are some slow passages here, more meditative, with elements of chromaticism, while others, such as the “main theme” itself, Allegro giocoso, are much more expressive and virtuosic. The concerto achieves this effect of doubleness through its brilliant, concertizing form.

The Piano Concerto (1949) in three movements differs somewhat in its range of expression. There is not much ambivalence to speak of. The concerto was commissioned by the Boston Symphony Orchestra, with Poulenc himself as soloist. He decided to compose a “light concerto, a souvenir from Paris for a composer-pianist”, hence, for himself. And light it is, and a wellspring of musical ideas, more or less brutally juxtaposed. Here we have striking melodies, as the opening theme in the first movement, or the lyrical theme in the second. But in the middle of the first movement, for example, he turns up the Romantic pomposity, with heavy chords and fiery brass. The last movement is pure concertizing. The piano part is varied, the orchestral movement as well. In The New Grove Dictionary of Music and Musicians we read that the concerto “demonstrates the dangers of sectional, ‘surrealist’ techniques of composition.” The observation is correct, but it is also this technique that makes the concerto so witty. There is no compositional consequence. The concerto is not “organic”, which is the opposite of sectional. Everything is simply linked together into the grand display of a concerto.

The Concerto for Two Pianos and Orchestra (1932) lies perhaps somewhere between these two. It was premiered in Venice with the La Scala orchestra, and with Poulenc and his friend, Jacques Février, as soloists. Is this the concerto that comes closest to Stravinsky, i.e. that is music in quotation marks? The American composer Elliott Carter called the concerto “a pastiche consisting of music from Scarlatti, Mozart, Schumann, Charbrier on up to Stravinski and popular singers.” But he thought it sounded convincing on account of “Poulenc’s unbelievable sensitivity to harmonies and orchestral sounds.” Here once more there is no form of thematic development; rather a juxtaposition of different passages. It is perhaps in the slow movement that Poulenc really composes in quotation marks. The movement opens with a stylistic imitation of what almost could have been a slow movement in a piano concerto of Mozart (Romanze in KV 466?), another of Poulenc’s favourite composers, before going its own way, melodically, harmonically and rhythmically. With that, the historic distance is sounded, in purely musical terms. The quotation marks are in place. So, too, the music.