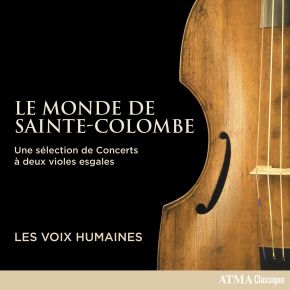 Le Monde de Sainte-Colombe is a compilation drawn from recordings of the complete Concerts à deux violes esgales by the viol duo Les Voix humaines. This selection consists of the 12 Concerts that are most beloved by listeners and most frequently played by the members of the viol duo, Susie Napper and Margaret Little.
It is impossible still today to ascertain the composer’s exact identity: Sainte-Colombe never held an official post, and his main body of work, never published in his time, consists of 67 Concerts for two viols. The manuscripts were rediscovered at the end of the 1960s by Paul Hooreman among papers having belonged to Alfred Cortot.
This repertoire has also become famous following the publication of Pascal Quignard's novel Tous les matins du monde, which was made into a film by Alain Corneau in 1991.