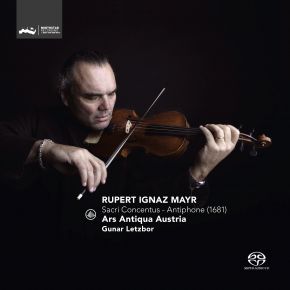 Following on from the highly expressive psalm settings, we now present the glorious antiphons of the master from Schärding am Inn: exquisite church music which Emperor Leopold I himself proclaimed as being definitive for the Catholic lands.

Originally, the antiphon denoted a Gregorian chant that was sung by two parties opposite each other. Often a single performer was answered by a group of singers. The antiphon would later disengage from the psalm on which it was commenting. The antiphons set by Mayr represent a special form of the genre, so-called Marian antiphons, almost all of which are addressed to the Mother of God. Only In terras descendam is intended for Christmas. The antiphonal practice is still apparent in all antiphons in the alternation between singers and instrumentalists.

Markus Forster (soloist)More information
Christian Ziemski (soloist)More information
01-04-2020 American Record Guide
"I would describe these performances as adequate..."
20-12-2019 Duitse krant
"Great music!"
03-12-2019 Fanfare
"I am happy to have this record on my shelf, where it will stay unmolested like the last rose of summer until a visitor inquires about it, at which point I shall use it to demonstrate why Bach and Handel are so wonderful."
16-10-2019 HR audio
"Together with Letzbor’s liner notes, describing in detail the four ‘Sacri Concentus – Antiphonae’, adding to the historical value of this album, I do think that, like its predecessor, this follow-on recording is a must for all lovers of the genre, and I’m convinced that it will equally please all those who appreciate state of the art playing."