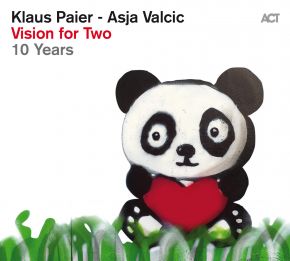 Accordionist Klaus Paier and cellist Asja Valcic have been making music as a duo for ten years. Their playing has kept audiences delighted and critics enthralled: “Breathtaking”, said the magazine Der Spiegel; they are “a captivating match” (The Guardian). Their journey together began in 2009 with their debut album “À Deux”, and since then Paier and Valcic have proceeded to make their unique accordion-plus-cello sound into a thing of wonder.

This tenth anniversary album “Vision for Two – 10 Years” is to some extent a conspectus, but also shows how this visionary duo continues to reinvent themselves and refresh their outlook. A panoply of what they have achieved musically is right there from the start of the title track. Both Paier and Valcic have their musical origins in the classical domain, but have moved on from it in a spirit of stylistic openness, and found a musical language which is theirs yet universal. The sound is always their starting point: they have a finesse and eloquence from classical music, combined with the free-thinking, quicksilver instinctiveness of jazz, and influences from many parts of the world. What results is capacious, widescreen music, a multi-layered and fascinating sound world in which Paier and Valcic invite listeners to immerse themselves.

The tracks of “Vision for Two” demonstrate this duo’s unique compositional talent and creativity – and also their capacity to dream. “Straight Thirteen” has an infectious groove, its repeated melodic hook set against a lively asymmetric beat. “Angela” has a melancholy and dramatic feel, “Hidden Thread” has impressionistic colours, and “A Love’s Delight” more than a hint of South America. While Valcic salutes Debussy, Paier pays a swinging homage to Mozart. The album comes to a close with the bandoneon ballad “El Alba”. But just before that final tune there is a short, highly percussive Latin blues number, and ist title neatly sums up where Paier and Valcic now see themselves as they mark a decade of music-making: “Moving On”. They have indeed achieved remarkable things through their vision of dialogue and interplay – and intend to do much more.