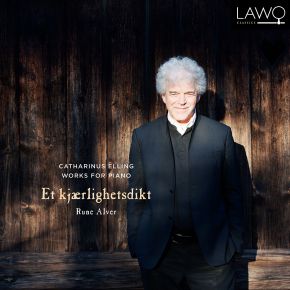 The Norwegian composer Catharinus Elling (1858–1942) left a large and interesting body of music for the piano. The music has never previously been recorded. Now, at last, the audience can get a look into his musical world!

Grieg would be a great benefactor for Elling, both musically and in a more practical sense, as he was for many Norwegian composers of Elling’s generation. Elling had his first compositions published in 1881, but held a rather low profile in Norwegian musical life in the early years of his career, save as a music critic. In 1884 he held his first concert evening with his own works, and when this was positively received, Elling mustered the courage to send some of his compositions to Grieg. It was not unusual for established composers to be sent such packages, and most of them never received an answer. The reaction from Grieg, however, must have surprised Elling himself, as his compositions was the topic of a letter sent to the newspaper Bergens Tidende on 14 March 1885. Here, Grieg wrote as follows:
Catharinus Elling is the name of a young Norwegian musician, who recently sent me a large pile of composition to look through from Kristiania, where he is situated. These kinds of parcels are not rare, but as the quantity normally so completely overpower the quality, I must confess that I, wise from experience, did not open the parcel in great excitement. How big was my surprise and joy, then, when only a few bars showed me that I was in the presence of a lyrical talent of high rank.