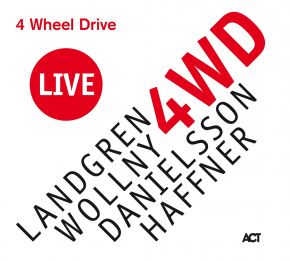 The combination of the four bandleaders Nils Landgren, Michael Wollny, Wolfgang Haffner and Lars Danielsson into a supergroup raised eager anticipation and high expectations – and 4 Wheel Drive duly fulfilled both. Not only did their studio album stay at the top of the official German jazz charts for four months, the band’s “ACT JazzNights” tour organised by leading promoter Karsten Jahnke brought out the absolute best in all four artists.

The last of the eleven concert dates was on 19 April 2019 at the Theaterhaus Jazztage in Stuttgart, and “Four Wheel Drive Live” is the result. Thomas Staiber from the Stuttgarter Zeitung was there: “A triumph. This musical four-cylinder engine with its four-wheel drive negotiated the rugged terrain of jazz and was equally at home in enjoyable pop music. They did both sensationally…and unleashed storms of genuine enthusiasm.”