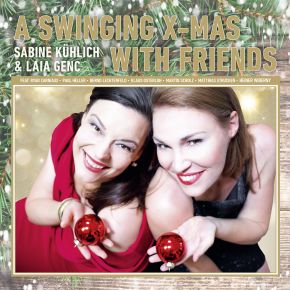 A Swinging X-Mas With Friends

Since the end of August, the layered pralines called Dominosteine, Christmas stollens and the chocolate bunnies melted into little Santa Clauses have been on supermarket shelves announcing the holiday season like writing on the wall. Snow begins in late summer in television advertising, while chubby teddy bears sled in the shop windows of department stores. Bets are placed among colleagues about who will hear “Last Christmas” by the group Wham! droning from a radio first. Everyone suddenly knows what's coming: shopping and social stress, the cooking of the most complicated recipes, overheated living rooms, fir trees losing their needles, and gifts that you did not wish for and for which you are supposed to express thanks. This excess is commonly called "Christmas." At the end of a year, it saps our strength that we no longer have a lot of. Only when the festivities are finished is the promise be fulfilled: Silent Night, Holy Night.

However, there are occasionally places of respite, places of reflection or secret formulas for lowering the stress level. Even though the abundance of Christmas records by jazz musicians in recent years has assumed almost inflationary proportions, thankfully a few still stand out that not only fulfill their mission for the “festival of love”, but also infuse all their passion and anticipation in the music. Vocalist Sabine Kühlich (studies in Amsterdam and New York) and singing pianist Laia Genç (one of the most renowned keyboard sound artists between composed structures and improvisational freedom) are definitely among them. “Swinging X-Mas With Friends”, the current album of the successful duo, puts exactly one of the central messages at the center, namely spending Christmas with family and friends, i.e., having people you like around you. And of course, the really special thing here are the two musicians, Sabine Kühlich and Laia Genç.

“If you are a fan of ours, then you are also a fan of ours at Christmas,” Genç laughs at a simple but conclusive common denominator. Because the way the successful duo interacts with each other, feeding each other the next phrase, already caused enthusiastic audience reactions to and fantastic reviews for “In Your Own Sweet Way” (Double Moon DMCHR 71164) in 2016. Following the meticulous compilation from Dave Brubeck's songbook, the two women simply let their hearts speak this time. “We reflected on which songs fit which one of us particularly well,” the pianist remembered. “There are so many great themes for Christmas. You can actually make a second Christmas record right away. And we heard many great productions while searching and browsing – old and new ones.” The selection was indeed difficult for the two of them. There is a broad stylistic band extending from “Winter Wonderland” to “Santa Claus Is Coming To Town”, “Have Yourself A Merry Little Christmas”, “Santa Baby”, “Rudolph The Red-Nosed Reindeer”, “Hallelujah”, “White Christmas” and “Silent Night” to German titles such as "Lass es schneiʼn” and “Schneeflöckchen, Weissröckchen”. It also extends to French chansons, jazz, gospel and Dixieland, but also includes Finnish lyrics.

Laia Genç remembers that the most beautiful thing was the atmosphere that evolved when they were recording. This was not least due to the numerous friends who actively supported the project. “We thought about the people, with whom we've already worked. And with whom we'd love to work.” The rhythm group remained the same with Markus Braun (bass) and André Spajic (drums), and it was also supported by Paul Heller (tenor saxophone), Ryan Carniaux and Klaus Osterloh (both trumpets), Matthias Strucken (vibraphone), Bernd Lechtenfeld (trombone), Heiner Wiberny (clarinet) and Martin Scholz (piano/organ). Sabine Kühlich added: “We were all very happy – time passed more slowly, sweetly, and deeply.”

17 slightly different Christmas songs, interpreted by two exceptional musicians “with a little help from their friends” – actually the perfect recipe against the annual madness. Those who get involved with the two passionate Christmas fans Sabine Kühlich and Laia Genç will quickly notice how tranquility and happiness take hold of you. And not just at the end of the year.