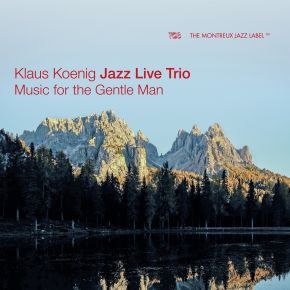 Music for the Gentle Man

Klaus Koenig about The Jazz Live Trio: “The Jazz Live Trio has a commission by the Swiss radio station to put together an in-house trio for a jazz concert series to thank for its very existence. Between 1964 and 1982, we were able to take on this demanding task a total of 111 times, with many different people making up the trio. The fellow musicians who played with me for the longest were the bassist Isla Eckinger, then Peter Frei and the drummers Pierre Favre and Peter Schmidlin, who went on to found the jazz label TCB.

“We were enormously lucky that at the time there were a large number of world-class American musicians living in Europe, who were always available for radio gigs. We were also able to play with some of them later outside of the radio environment, such as Slide Hampton, Dexter Gordon, Booker Ervin or Sal Nistico. More often still we were able to play with Lee Konitz, and for some time as a regular fixed quartet with Johnny Griffin. Thirteen CDs are available from TCB and bring this radio concert series back to life.

“Our many years working with Franco Ambrosetti, which were primarily in Italy, and the young Roman Schwaller, were unforgettable.

“The desire to work with like-minded people to take the risk of developing our own group music which did not follow standard patterns over a long period of testing led to us forming our sextet Magog, whose first appearance at the Montreux Jazz Festival in 1973 immediately led to unexpectedly high levels of success with both the audience and the international press. The recording of the concert was published a little later as an LP by Evasion. A studio production with Japo/ECM followed. Both recordings are now back on the market as CDs (TCB Ol 232 and TCB 02 302). For me, Magog, with Hans Kennel, Andy Scherrer, Paul Haag and my trio including Peter Frei and Peter Schmidlin, were the highlights of my long musical career, and something that can possibly only ever be achieved once. We were probably in the right place at the right time, as my friend Peter Schmidlin once said.

“Working purely as a trio was predominantly in Italy, where we were not quite as well-known as an accompanied trio. I have a very strong link to this country. This is possibly why we found such welcoming ears there.

“In 1997/1998, focal dystonia put a temporary end to my work as a musician. Only in 2012/13 was I able to get back to the stage, after a lot of mostly unsuccessful treatment. This was with restricted abilities, as dystonia is incurable. But with the exciting challenge of using the restriction to create my own message and to develop my own distinctive style, I brought the trio back to live with the two young and highly talented musicians Patrick Sommer on bass and Andi Wettstein on drums. A year later, we founded the quintet Seven Things, bringing the trio together with Daniel Schenker and Christoph Merki, with whom I had worked as Magog 2 before my illness. Our first quintet CD Piazza Rotonda (TCB 33 102) was given the highest award of five stars in Jazz'N'More. The first trio CD, Nausikaa, (TCB 32 502) also received positive reviews both here and abroad. Our second Seven Things CD Seven Things I Always Wanted To Say" (TCB 35 402) will be released in Moods on my 80th birthday in October 2016, our second trio record Night Thoughts (TCB 35 202) in Baden in April 2017.