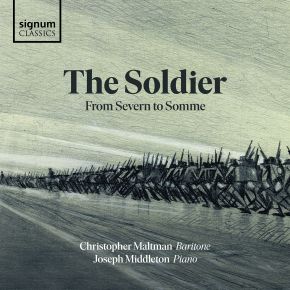 From Severn to Somme

The programme performed here by baritone Christopher Maltman and pianist Joseph Middleton was born whilst Maltmann was studying at the Royal Academy of Music. The compositions have been selected to form a coherent but flexible narrative that produces a touching memoire to all those affected by war. One composer chosen for the record, George Butterworth, was a casualty of the First World War: in September 1915 he want to the trenches and was killed, aged 31, in the Battle of the Somme on 5th August 1916. The use of his composition, A Shropshire Lad, is touching in this instance. It gives the listener a more sensitive perspective of the loss in World War One, almost allowing the listener to see the faces those who passed away, most of whom were young ‘lads’ from various parts of the country.