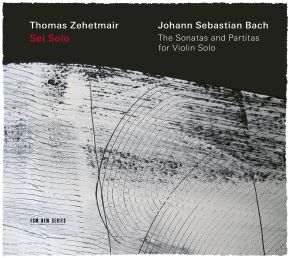 Sei Solo - The Sonatas and Partitas

Thomas Zehetmair, one of the great violinists of our time, re-visits the solo works of Bach, the summit of the violin repertory. Using period instruments, Zehetmair plays the music with vividness and intelligence to produce a recording that is deeply steeped in the music and at the same time original.
The album was recorded at Propstei St. Gerold and is issued as a double CD  with texts by Peter Gülke and Thomas Zehetmair.

Johann Sebastian Bach (composer)More information
28-01-2020 Opus Klassiek
"The most essential is, of course, Zehetmair's interpretation, which, apart from a few minor details, may be considered monumental. Also an interpretation in which layer after layer with great structural insight is peeled off or forged together for the listener. In which a range of timbres is entirely at the service of the musical expression and in which the 'Empfindung' is deeply rooted."
16-01-2020 NRC
"A rare rich and well-developed universe of colors, dances and thoughts."
12-01-2020 Het Parool
"Zehetmair plays Bach beautifully without exception."