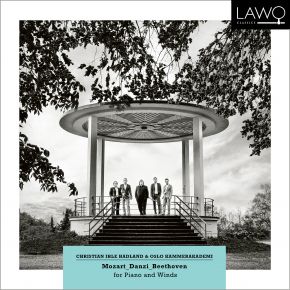 Mozart/Danzi/Beethoven for Piano and Winds

Unfortunately there is no real Norwegian language equivalent to the expression “unsung hero,” but one can immediately place Franz Danzi in that category. His upbringing in Mannheim in the 1770s and 80s provided him with the perfect backdrop to experience the most important musical currents of the time, where people puttered around with such things as synchronized bowings and soloistic wind parts in the orchestra – elements commonplace to us today, but considered quite groundbreaking then. The young Danzi also met Mozart, who showed a great interest in the pioneering work in Mannheim, and Danzi expressed boundless admiration for the old master throughout his entire life.

Danzi’s big dream was to further develop the German Singspiel genre, where Mozart, with the operas The Abduction from the Seraglio and The Magic Flute, had laid a golden foundation. Danzi’s wife, Margarethe Marchand, was an outstanding soprano and an enthusiastic promoter of her husband’s works, but when she died at the young age of 32, Danzi seemed to lose interest in the genre. However, he was an avid supporter and inspiration to his younger colleague, Carl Maria von Weber. Weber’s Singspiel Der Freischütz (The Marksman) took the genre to new heights, with the manifestation of nature as a singing creature. For this we must
thank Danzi!

Quintets for winds and piano are a rare bird in music history, and the reason for that may very well be that Mozart’s and Beethoven’s own works set such high standards that few dared to follow in their footsteps. This idea is by no means an oddity. We can think of the clarinet quintets of Mozart and Brahms, which depict a perfectly symbiotic soundscape just waiting to be explored. But where these two towers loom over all others, later “structures” have been few and far between. From the Mannheim development, which gave the winds more space in the orchestra, came the desire for pure wind ensembles of various sizes, and also in combination with other instruments. Mozart’s quintet is a natural first stopping point for this development, and as is often the case with Mozart, his first attempt becomes a great success: an ensemble that basically isn’t particularly homogenous, in a perfect unit, where there is still plenty of room for each instrument to shine. The piano has a supporting role but often discreetly lies in the background against the vibrant escapades of the winds. The first movement has a lithe introduction where the lines wander, in the most outstanding Mozart-esque way, from instrument to instrument, intersecting and inspiring each other, but never overshadowing or disturbing one another. The Larghetto is an archetypal Mozart movement from this period, seemingly uncomplicated, but where long, increasingly intricate harmonic surfaces unfold before it all returns to the charming, operatic bits that bring us safely to shore. And to mark the soloistic element of this quintet, Mozart rounds off the finale’s lively rondo with a brief cadenza, where the instruments mimic each other before uniting together toward the final stretch.
One of music history’s most mythical, yet almost unwritten encounters is the one that took place between Mozart and the then 16-year-old Beethoven in Vienna in 1787. Virtually every source contradicts the other. Some claim that Mozart was beside himself with enthusiasm, others that he was lukewarm and didn’t want Beethoven as his student. Neither Mozart nor Beethoven mentions the meeting in his own correspondence, but we can infer from Beethoven’s late sketchbooks he used to keep a conversation going – he received written questions and answered them verbally – that a meeting took place and that there may have been more than just cordiality on Mozart’s part.

Mozart was 28 years old when he composed his quintet. With over 450 works under his belt, his name was well-established in Vienna and he could thus allow himself to compose a piece where other musicians could shine. Beethoven was a relatively unknown 26-year-old when he released his quintet. He first and foremost sought to emerge as a pianist, and to a lesser extent a composer. His quintet is often regarded as a twin piece to Mozart’s, but despite all the external similarities – the key, the slow introduction, the three movements – they have very little else in common. Mozart represents the coronation of classicism, an Olympic, brilliantly clarified form in which established frames are fully exploited. Beethoven wants to get away from white, delicate porcelain skin under parasols in the imperial pavilions into a raw world where the pianist is quite impolite as the work draws to a close, leaving on a long improvisational tour while the other musicians find themselves sitting and waiting. The theme continues when it suits him. Still, there is no doubt that Beethoven’s quintet is very much an ensemble piece; the twisted evolution of ideas in the first movement’s introduction and the mysterious, veiled development section in that same movement is the work of a master. Long, swimming pedals and a canon section in the finale, that most of all sounds like a big misunderstanding, are both indicative of what’s to come. Early Beethoven has an uncomplicated, musical feel, the welcoming and charming themes of the 2nd and 3rd movements sit in one’s ear and both form the basis for the rondo movements with delicately carved, contrasting episodes.
As a liberating antithesis to the happiness in E-flat, comes Danzi’s quintet in D minor. Here we are far from lace and crystal, but on the contrary, deep-seated in a pre-romantic, bleak landscape – and perhaps the slow introduction is a slight nod to Mozart’s unfinished requiem? To a greater extent than Beethoven, Danzi sets the piano and winds up against each other, where themes are often first presented in the winds and are then embroidered or further developed in the piano voice – which in the first movement is swirling and swarming, while the wind voice is heavy, broad, and insistent. The second movement begins with a gentle, slightly withdrawn theme before it all slowly rolls away, seasoned with improvisational whims and long, uninterrupted sounds. The third movement is an abrupt affair with a partly jarring, somewhat singable theme, interrupted by more optimistic middle parts, which nevertheless fail to remove the impression of a rather dark world.

All in all, a trilogy of vastly different origins takes shape – the superb Mozart, the forging ahead, self-centered Beethoven, and the “worker ant” Danzi, who while playing the piano himself, wanted to clear a space for wind instruments within chamber music. He achieved this not in the least as the “father” of the wind quintet, where he has a catalogue of outstanding works to his name.
– Christian Ihle Hadland