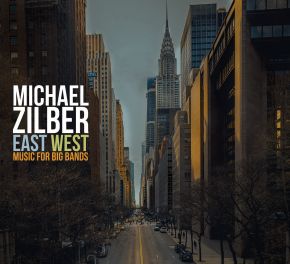 Composer/Saxophonist Michael Zilber's musical approach has always been a unique mix, bred from myriad activities over the years in New York & Boston in the east, and Vancouver & San Francisco in the west. On East West, that aspect of his being is front and center, along with his delving into writing and arranging for big bands over the last decade. Tackling an ambitious, once-in-a-lifetime project with two big band recording sessions - one in New York, the other in San Francisco - Zilber gathers from his extended music community two groupings of powerful, empathetic musical voices, their collective commitment to support, share and create shining through these 14 tracks. Featured are 8 originals and 6 arrangements of classic songs,  including "Joshua," "Fall," "Skylark" and "Somewhere Over The Rainbow."  "...one of the best composers and players around anywhere. Period." - Dave Liebman