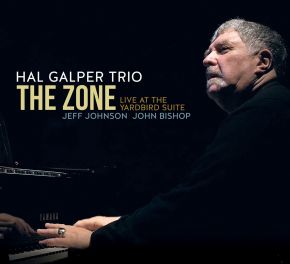 The Zone: Live at the Yardbird Suite

In his fifth decade as a major jazz artist, Hal Galper continues the innovation that has made him one of the most surprising and satisfying pianists alive. His 21st century series of albums for Origin over the last 12 years incorporates the elasticity of rubato performing as a means of melding melodic lyricism with the visceral rhythmic excitement of bebop. This 8th recording in the series highlights the deep musical bond of his trio, with bassist Jeff Johnson and drummer John Bishop, and their uncanny ability to slip into "The Zone" - where self awareness is abandoned and the music is allowed to control the proceedings. Performed in the inviting environs of the Yardbird Suite in Edmonton, Canada, it was months later that the recording from the soundboard was reviewed. Asking "Who is this piano player?," Galper recognized the music was coming from a deeper than conscious place and that documenting the trio deeply in 'the zone,' and in the wild, was necessary. "...a moment of thrilling uncertainty, slightly airborne and stretched out in unusual shapes and motions, and (the moment extended) out for the length of a song, each and every time." - Wondering Sound.