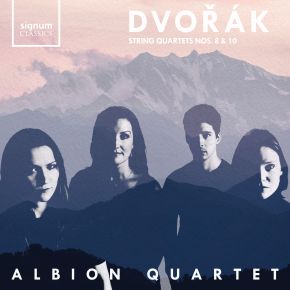 It has long been recognized that Antonín Dvořák (1841-1904) was one of the greatest late nineteenth-century contributors to the string quartet, and the accolade says something important about his aspirations as a composer. After all, this restricted medium, with strong reminders of the early eighteenth century in its duetting violins, was powerfully against the times in a period of gigantic instrumental and choral ensembles, and of ever more extreme searches for new colours and combinations. But it was equally clear that the string quartet had, since the days of Haydn, Mozart and Beethoven, transcended its limited sonic possibilities. It had come to represent not so much an ensemble as a Tradition: one of two critical symbols (the other was the symphony) of the aesthetic prestige that Austro-German instrumental music had claimed over the course of the century. There was, though, an evident problem with the string quartet: unlike the symphony, which could easily accommodate explosions of colour by employing an ever-expanding orchestra, the quartet remained trapped in its peculiar, restricted sound world. Small wonder that those most anxious about their place in the Tradition trod warily. Mendelssohn’s remarkable, almost carefree teenage confrontations with late Beethoven quartets (his Op. 12 and Op. 13) were never replicated. Brahms and Schumann, both drawn to chamber music and intimate expression, tended to shy away from pushing the boundaries of the quartet, reserving for the medium some of their most conservative and “serious” inspirations. By the end of the nineteenth century, the quartet seems almost to have sunk under the weight of its sanctity. It took a new wave of “classical” composers in the twentieth century, armed with new musical languages and new reasons to cultivate austerity, to renew the ensemble from within: cue Schoenberg,
cue Bartók, cue Shostakovitch.

The most conspicuous example contradicting this line of argument comes from Dvořák’s contribution to the string quartet, which was important to
him throughout the various stages of his career: he wrote fourteen of them, starting in his twenties and continuing until a few years before his death.
And therein lies a complex biographical tale, intimately involved with the status of a composer who by virtue of his birth in the Czech region of the Austrian Empire was inevitably placed outside the Tradition. His musical training in the Prague organ school was that of a Kapellmeister, but while a jobbing viola player in Prague he learned from the occasional appearance of luminaries from the centre: in February 1863, for example, he played a concert under Wagner’s direction, the programme including exciting novelties such as the Tristan Prelude. From this early period come the first four quartets, in which one can hear Dvořák moving in a somewhat undisciplined way through a series of stylistic experiments, from Beethoven to Schumann and even as far as the wilder reaches of Wagnerian harmony (with predictably unstable results). But then, in the early 1870s and confronted by the complete failure of his arch-Wagnerian opera King and Charcoal Burner at the Prague Provisional Theatre, he decided to retreat from advanced German trends and instead embrace a more conservative idiom, albeit one that included “Slavonic” elements for added spice and individuality. It is significant that this decision to make a stylistic shift was again marked by string quartet composition; the fifth, sixth and seventh quartets all emerged in 1873-4, and all achieved a greater sense of balance and proportion through a return to Schubertian ideals.

Equally important in the emergence of this “new” Dvořák was his application for, and award of, a series of Austrian State Stipendiums. Not only did these allow him more leisure to compose, but they also put him close to the very heart of the Tradition. On the jury for his first application in 1874 was the revered Viennese music critic Eduard Hanslick (by now a staunch anti-Wagnerian and supporter of Brahms); by the time of his second application, a year later, Brahms himself was one of the judges. In 1876 Dvořák proudly included for the jury’s inspection a further string quartet, No. 8 in E major, the first of the two quartets on this disc. It was this and other pieces that caused Brahms to write an enthusiastic letter of recommendation to his publisher Simrock, who took up Dvořák with some enthusiasm. But it is probably significant that Simrock’s first commission was not for a piece in a “serious” genre such as the symphony or string quartet – those genres that Dvořák was so anxious to impress in – but rather for a set of “Slavonic Dances” for piano duet: in other words, for music that would mark the composer out as a musical exotic, a purveyor of what has with some justification been called “tourist nationalism”. In spite of this exoticizing move, the flood ates soon opened. By the end of the 1870s, with two further string quartets published (No. 9 and, soon after, the second work on this disc, No. 10), Dvořák found himself in demand at the highest levels: a symphony was commissioned for Vienna by Richter; Joachim wanted a violin concerto; publishers were queuing up for a further quartet (No. 11). Dvořák’s future was assured.

During the remainder of his distinguished career, Dvořák continued to hold in careful balance his dual aspirations: to be accepted as part of the
Tradition but also to be regarded as a national figur , representative of his country. Sometimes these positions came into open conflict, particularly
at moments of political tension between Vienna and Prague. But in the 1880s and 1890s he found a welcome home from home in Britain (nine
separate visits, honorary membership of the Philharmonic Society, even an honorary degree from Cambridge), where his Czech identity was eagerly
embraced; and of course he travelled to the US, where he was welcomed as a “national composer” who might aid in the formation of an authentically
American school of composition. Three more quartets appeared in the early 1890s (including No. 12, the famous “American” quartet), and the
period also saw a partial return to Wagnerian enthusiasms in his most popular opera, Rusalka (1901). Even a hundred and more years after his death, Dvořák’s reputation as a “national composer”, admittedly one he often fostered with some enthusiasm, has never faded. His most popular pieces still tend to be those that overtly parade their nationalistic credentials, even though it is clear that his interest in any putative Czech musical heritage rarely went
beyond the clichés of the period, never aspiring to the “authenticity” that a later generation of composers would attempt. This attitude can be seen even in perceptions about what makes a convincing musical performance of his music: in extreme cases some mysterious national essence is thought to transmit itself across the generations to produce an “authentic Czech sound”. In this context, Dvořák’s continual return to the string quartet offers a powerful counter-argument. It is a body of work unique in the late nineteenth century, and one that paints the picture of a composer who, in spite of occasional gestures to “Slavonic” material, was above all anxious to compete for the Austro-German high ground, and to do so in the most prestige-laden chamber music form available.