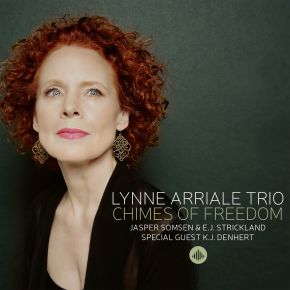 “One of the most exciting pianists in contemporary jazz” (The Guardian- UK), pianist/composer, Lynne Arriale, has performed on international concert stages over the past 25 years. Jazz Police called her "the poet laureate of her generation". She has touched the hearts and inspired the imaginations of audiences worldwide and has been consistently praised as having a "singular voice" as a pianist, bandleader and composer. “Lynne Arriale's music lies at the synaptic intersection where brain meets heart, where body meets soul. She achieves a special, deep connection with her audience, and the energy flows both ways. Arriale's emotional authenticity allows her audience to feel and think along with her…She is one of jazzdom's most intensely unique voices.” JazzTimes

“Chimes of Freedom”, Lynne Arriale’s 15th album as a leader, was recorded in Europe for release by Challenge Records International.  Lynne is joined by renowned musicians, Dutch bassist/co-producer Jasper Somsen, drummer, E.J. Strickland, and guest vocalist, K.J. Denhert. In “Chimes”, her most passionate artistic statement to date, Lynne reflects on freedom, cultural diversity, and her wish that all refugee families may reach an inclusive safe harbor among the democratic nations of the world. This remarkable collection features seven of Lynne’s original, deeply personal works. The spiritual,”Sometimes I Feel Like a Motherless Child”, together with Lynne’s evocative “Journey”, “The Dreamers”, “3 Million Steps”, “Hope”, “The Whole Truth” and “Lady Liberty” weave a dramatic narrative, crowned by the trio’s collaboration with K.J. Denhert singing Bob Dylan’s “Chimes of Freedom” and Paul Simon’s “American Tune”. “Chimes” is a worthy and timely successor to Lynne’s critically acclaimed “Give Us These Days”; a thematically-related suite that considers the transient nature of human existence.

Lynne is known throughout the jazz world for the clarity, honesty and lyricism of her melodic lines, her virtuoso technique, and her genius for creating a synergistic environment around the trio, whose sound is greater than the sum of its parts.

Enoch Jamal "E.J." Strickland is world-renowned drummer and composer who has appeared on over 60 albums. He is in great demand in New York's jazz scene and has toured, performed, and recorded with some of the greatest names in contemporary music: Wynton Marsalis, Ravi Coltrane, Cassandra Wilson, Terence Blanchard, Lizz Wright, Russell Malone, George Colligan, David Gilmore, Vincent Herring and Nnenna Freelon. As a bandleader, E.J. has released three albums.

Jasper Somsen (featured)More information
E.J. Strickland (featured)More information
K.J. Denhert (featured)More information
06-11-2020 Melodiva
"... A statement as courageous as it is important in increasingly selfish times... Impressive the realization of the virtuoso pianist, how Arriale wraps this in music and communicates it to the world."
06-07-2020 Jazzpodium 07 08 2020
"... When listening to them, one can only be thankful that Arriale musically goes far beyond the means of these icons of 1968, whose melodies, stuck in the collective consciousness, are newly harmonized and saved into an unnostalgic present..."
06-07-2020 Piano News
"... restriction to the essentials that distinguishes the pianist's style. For although the New Yorker has a solid classical education, she does not place virtuoso skills in the foreground. Only every now and then does dexterity show up. Otherwise Lynne Arriale focuses more on musical qualities, namely superb melody leading and rhythmic security..."
05-06-2020 Klassieke zaken
"She swings great!"
31-05-2020 Jazzhistoryonline.com
"May this beautiful music inspire us to greatness."
29-04-2020 Le Soir
"... fantastic: it swings, it grooves and yet remains very refined."
24-04-2020 Jazzism
"The pianist, plays orchestral, uses the entire piano, and performs, besides many serious things, a hopeful and sparkling Caribbean piece: Reunion."
16-04-2020 Jazz Weekly
"Arriale’s fingers tickle the piano to the rustling rhythm on “The Dreamers” after Strickland opens up the intriguing tune. The three create an almost Coltranesque rubato on the traditional “Sometimes I Feel Like A Motherless Child”."
08-04-2020 De Standaard
"This is nice unpretentious mainstream jazz, the musical fun just explodes."
02-04-2020 Jazz Press/ Poland
"Lynne Arriale's fifteenth album as a leader. This time, next to the leader's own songs, the trio took Bob Dylan and Paul Simon's classics to the workshop."
24-03-2020 Jazzthing
"... the music is inspired by the energy to preserve the idea of America's greatness beyond the arrogance of the white old men."
12-03-2020 Musikansich
"... This fusion works magnificently and produces a result full of playing pleasure, a mixture of technique, feeling and passion that is very stirring....."