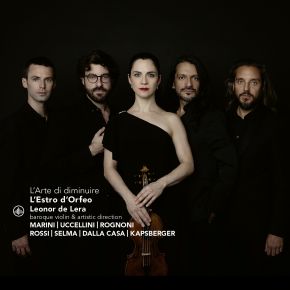 Diminutions, the art of extemporary embellishment or melodic variation, were an essential part of performance practice of the Renaissance and early Baroque periods. The basis of diminutions is the fragmentation of a long note or series of long notes into many shorter and faster ones that move around the original melody. In the 16th and early 17th centuries, a composition as written by the composer was often regarded as raw material and it was normal and even required of musicians to embellish the works performed. The number of treatises that were devoted to the teaching of this subject is a clear indication of the importance of diminutions at that time. Most of these manuals included a collection of decorated melodies taken from renowned madrigals, motets and chansons by well-known composers of the time.  These pieces give us clear examples of how music was performed during that time and what was considered the proper way to embellish a piece of music. Often technically demanding, these pieces gave scope for virtuoso display as they required great dexterity from the performer. In conclusion, diminutions were added to make a piece of music more ‘beautiful’.
This CD explores the widespread practice of diminutions by presenting published examples of diminutions on well-known motets, by master composers; diminutions on popular melodies or dance forms and finally, diminutions composed by the performer as artist. I hope this recording will bring the listeners closer to the subject of diminutions which is, in my opinion, an art in itself.

Needless to say, the CD is listened to with pleasure from beginning to end: for the superb music, for the interpretation that creeps between sacred, profane and theatrical, between instrumental and vocal, demonstrating that one thing is to improvise at the "'ndo cojo cojo", and another is to do so referring to criteria in use at the time.

"
01-12-2020 Classic Voice
"Estro di Orfeo show they can master such difficult art [diminuzione] in both the ancient samples and in new elaborations: these ones are especially interesting as they stay back from the today trendy kitch."
02-11-2020 musica Dei donum
"This disc deserves the attention of all lovers of early music, not only because of the fine performances of the written-out pieces, but also - and even more so - because the performers have applied the instructions of the various treatises on ornamentation and diminution in music of their own choice. They have transported themselves to the glorious days of diminutions, and invite the listener to join them."
24-09-2020 Fanfare
"The performance by L’Estro di Orfeo is good..."
01-09-2020 clicmusique.com
"Here again, a Splendid recital, which must be added to that of Onofri."
17-07-2020 Luister
"The performance is crystal clear and virtuoso."
01-07-2020 Musicweb International
"There is a risk that the conventions that the disc honours might throw a blanket of ‘sameness’ across the constituent parts, though this is perhaps only a danger in hands of the less-than-masterly performer and interpreter. That’s certainly not the case here, where, if there is a cohering affinity between the assembled compositions and the manner of performance, it only serves to attest to the veracity and authority of the ensemble’s style and execution. Indeed, it is the contrasts that make the most striking impression. In addition to the opposing ambience of diminutions written on well-known motets and madrigals respectively, there are diverse textures and instrumental sonorities, and countless types of diminution, all of which strive for a different expressive effect: delicacy or majesty, gravity or nonchalance."
15-05-2020 Luister
"CD full of delicious, longing melodies for violin, viola da gamba, baroque guitar, harpsichord and organ, among others, an excellent guide to get to know lesser-known baroque composers from Spain and Italy."
01-05-2020 Scherzo
"

"
26-04-2020 ResMusica
"This colorful disc is a perfect illustration of baroque instrumental rhetoric."
15-04-2020 De Standaard
"This one protrudes above ground level thanks to the compositions of three of the ensemble members. Throughout the virtuoso and stylish spielereien a different, recognizable face awaits. Posh, Scary and Sporty Spice on baroque instruments: it swings from alpha to omega."