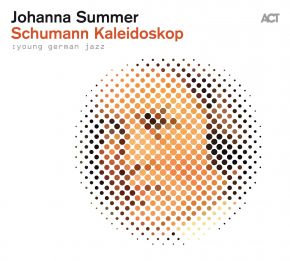 The Süddeutsche Zeitung hailed Johanna Summer’s performance at the Young Munich Jazz Prize in 2018 as “a small sensation”. The pianist, born in Plauen in Saxony in 1995, had encompassed the whole gamut from jazz freedom to classical rigour. The critic from this respected newspaper marvelled at her “amazing gift to make well-known melodies sound so convincingly her own, they develop a real sense of creative urgency.” Summer’s winning of the prize itself became almost incidental; far more significant was the fact that this competition heralded the arrival of one of the most interesting new pianists in European jazz.

For her debut album, Summer has chosen to make compositions by Robert Schumann the point of departure for her journeys into pianistic fantasy. Schumann’s cycles of piano pieces “Kinderszenen” (scenes from childhood) and “Album für die Jugend” (album for the young) had been familiar to her since childhood, not just as player and listener, but also – because Schumann was from nearby Zwickau – as works by someone from her region of Germany. From an early age she was enchanted by both the melodic and the pictorial aspects of these short pieces. And yet, to make her own adaptations of seven of the pieces was a far from a simple task: “I worked for a long time on re-casting them, trying out all of the pieces in all keys and in a lot of different time signatures, creating several miniature interpretations and finally arrived at this selection, which I shaped into a cohesive sequence with a single arc.”

The depth of her involvement with the original Schumann pieces comes across strongly on the album. As does her impressive and complex personality as a jazz musician with a very wide range of expression: romantic passages and an instinct for melody, but also powerful grooves and exciting innovations. And all imbued with a sense of how to tell stories through music, a mature and clear vision of dramaturgy, dynamics, tension and atmosphere. A sentence written by Schumann seems to predict exactly the kind of new life that Johanna Summer has breathed into these pieces: “How infinite is the realm of forms, with everything that can be used and worked on for centuries to come.”