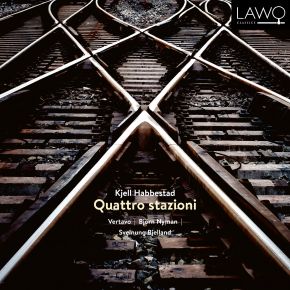 The first work, String Quartet No. 1—Quattro stazioni, takes its starting point in some spe­cific geographical locations: Holon, Israel; Rome, Italy; Kirkwall in the Orkney Islands; and Vassenden in the Hardanger region of Norway—in the form of traditional melodic material that arose in these places: a Samari­tan song, a Gregorian sequence, a Medieval hymn and a Norwegian dance tune. I have used the same approach, with music built on existing (preferably very old) melodic material, in a number of compositions.

The second work, String Quartet No. 2, takes its starting point in textual rather than musical material: the poetry of several au­thors and with contrasting emotional con­tent from movement to movement. There is no connection between either the poets or the poems. My intention here is not to tell a story or to convey an extra-musical message. Most vocal music begins with a text. Here the same principle is applied to instrumental music in that I have written a ‘song’. Once this has emerged as a melodic, harmonic and rhythmic totality I say “thanks for your help,” abandon the text as a carrier wave and try thereafter to not even remem­ber what it is about—while the instrumental work is further developed.

In the third work, Air d’été suédois, I take a further step in that I try to communicate a textual message through music. This is a musical narration that attempts to depict the soul’s condition and activity. To do this it is necessary that the music be supplemented with a program text, which is given below. The idea is old: it is found even in antiquity and was often used during the Romantic era by Liszt, Berlioz, Smetana, Richard Strauss and others who used such terms as «pro­grammatic symphonies», «symphonic po­ems» or «songs without words».

The last work on the CD, Divertimento, is not built on either musical or textual materi­als drawn from other sources but is a work developed to some extent in accordance with specific classical formal principles, in this case sonata form.

These four stations have played major roles in my work as a composer; indeed, all four are important elements of the music I write today.