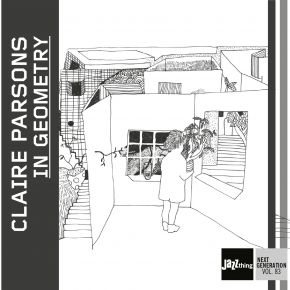 Claire Parsons ‘In Geometry’ is a multinational collaboration between the Luxembourgish/British singer Claire Parsons, the Israeli guitarist Eran Har Even, the French/Luxembourgish drummer and pianist Jérôme Klein, the Luxembourgish bass player Pol Belardi and drummer Niels Engel. The project is based in Luxembourg, Brussels and Amsterdam and is a vigorous contribution to the constantly developing modern European jazz sound. A perfect continental hub for the charismatic, imaginative bandleader. The five have perfected their inner symmetry in numerous concerts.

Their first album ‘In Geometry’ is the result of Claire’s search for her own musical identity and is inspired by composition techniques that study geometrical forms and their impact on the theoretical and practical world of music. Each of the musicians bring their unique vision and style to the music and thus create a very intimate and exciting atmosphere with the intention of creating harmony and balance within the existing environment. The album reveals their broad influences that go from jazz, folk, electro, pop, rock to classical music.

The young Austrian illustrator Astrid Rothaug created  the visual concept of the album and has drawn by hand the original video for the first single of the album ‘No Shape'. The objects represented by the illustrations will find their place among the musicians on stage during the performances and will allow an exciting interaction between audio and visuals in a full 'In Geometry' experience.
The album is launched by the label Double Moon Records together with the popular German jazz magazine “Jazz thing” in the Next Generation Vol. 83 series.

Claire Parsons & ‘In Geometry’ musicians: Eran Har Even, Jérôme Klein, Pol Belardi & Niels Engel
Claire Parsons, born in Luxembourg in 1993, is a Luxembourgish jazz singer of English origin whose interest in music came at the young age of 5, where she started playing the classical piano at the Conservatory of Luxembourg. She later studied other instruments such as classical and electrical guitar at the age of 9, jazz piano at the age of 15, classical and jazz vocals at the age of 16. She got her bachelor's degree in 2017 in jazz vocals and currently is working on her masters degree at the Royal Conservatory of Brussels under the supervision of the internationally renowned Belgian jazz singer David Linx and pianist Diederik Wissels.
As a player and composer of many bands & projects, she managed to make herself be noticed in the world of jazz music which has allowed her to play on many national and international stages and festivals.
Nominated in two categories at the Luxembourg Music Awards, she won the prize of “Best Upcoming Musician” in 2018. In 2019 she won the “First Prize Albert Michiels” at the B-Jazz International Contest in Belgium and in 2020 the first prize at the “Jazz Maastricht Professional Awards” with the project Aishinka.
After releasing her first EP «OnOff» with the Claire Parsons & Eran Har Even Duo in 2019, she will be releasing her first album ‘In Geometry’ under her name in May 2020.
Eran Har Even is an Edison nominated Israeli guitarist, composer and music teacher currently residing in Amsterdam. Since his arrival in the Netherlands in 2006, Eran has established himself as a leading figure in the Dutch Jazz scene – recording and performing with some of the finest Jazz musicians on the local and international circuits. (eranhareven.com)
Jérôme Klein is a French multi-instrumentalist and is currently residing in Luxembourg. After having studied jazz with three different instruments at the Royal Conservatory of Brussels, he has become part of many projects, mainly from Brussels and Luxembourg in which he is featured as Drummer, Pianist or Vibraphone-player, mixing many influences, going from Pop-rock to free improvised music. (jeromekleinmusic.com)
Pol Belardi is a Luxembourgish multi-instrumentalist and his curiosity in music was awakened at a very young age which has led him to study classical percussion, piano, drums, classical orchestra as well as playing in local rock and jazz bands. He then went on to study jazz bass and piano in Brussels and Amsterdam. He is the leader and co-leader of numerous projects and has established himself as a composer and musician in the local and international jazz scene. (polbelardi.com)
Niels Engel is a Luxembourgish jazz drummer. His musical career started at the Conservatory of Esch-sur-Alzette (LU) where he studied mainly classical music and later on jazz drums. He received his bachelor’s degree in jazz drums at the Conservatory of Amsterdam and is currently working on his masters degree at the ‘Musikhochschule für Tanz und Musik’ in Cologne.

Quotes
“Claire Parsons' new CD is a view of what is here and now and what is to come in music and even in society. Its construction is a political statement in itself at a healthy crossroads of jazz, folk and pop/rock. She's been exploring and refining her path for years now and is delivering little gems that are clear as water in both composition and lyrics served by an amazing band of outstanding musicians. I love it.” - David Linx (2020)

“You take the listener by the hand and show him around in this wonderful universe you've created with so much care, which is so rich in shapes, colors, moods  and emotions. But there is also real depth to this music, to you and amazing maturity. In a gentle manner you have blown me away! Beautifully written music. Great performance!” - Diederik Wissels (2020)

“The jazz singer amazed the guests of the festival with a spectacular performance.” - Laman Ismayilova, azernews.az (2019)

Even if I have it on Spotify, this is an album I also want a physical copy of, because it is just beautiful. Deepest respect for the nice songwriting, beautiful arrangements and fantastic musical and vocal performances of all members - this music has a high individual signature! And: all songs are great - there is no 'gap filler' on this album!

Pol Belardi (featured)More information
Niels Engel (featured)More information
Charles Stolz (featured)More information
14-08-2020 skjazzsk
"... Together the musicians create a very intimate and exciting atmosphere with the intention of creating harmony and balance in an existing environment. All this thanks to the many influences from jazz, folk, electro, pop to rock and classical music."
28-06-2020 Radio Dreyeckland
"... Each of the musicians involved brings their unique vision and style to the music, creating an intimate and exciting atmosphere with the intention of creating harmony and balance within the existing environment..."
25-06-2020 JazzFun
"... I can recommend this album to all those who are not only involved in orthodox jazz. They are beautiful, subtly arranged songs with lyrical guitar and piano solos that you can admire at any time."
23-06-2020 Jazzthing
"... With a lot of style they stage an intimate and unique atmosphere, to which each musician with his different background contributes the appropriate accents..."
23-06-2020 Musikansich
"... So it's the creative voice arrangements that create a mysterious mood, the music is calm and only occasionally takes off a bit in the direction of liveliness, now and then some polyrhythmic elements enrich the action and bring in a few dabs of jazzy fusion..."
05-06-2020 Midwest Record
"Here’s modern multinational Euro jazz that builds upon a classic ECM base and takes it to more instruments and into a deeper realm..."
05-06-2020 Letzebuerger Journal
"When it comes to the British-Luxembourgish singer and musician Claire Parsons, there are real hymns of praise sung. The 27-year-old has already proven her versatility and talent in many music projects..."
30-05-2020 Kieler Nachrichten
"The multinational quintet with its fixed point in Luxembourg delivers with its debut a pleasant-sounding, harmony drunken jazz, which proves itself instrumentally or winds itself around the tender voice of Claire Parsons... With her talent, further awards are only a question of time..."