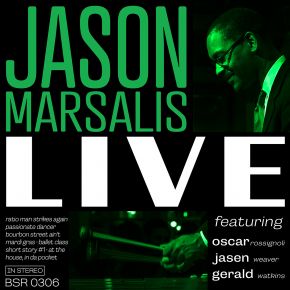 On May 5, 2017 an all-star roster of Basin Street Records recording artists came together to celebrate the kickoff of BSR’s 20th anniversary at the historic jazz venue, the Little Gem Saloon. The evening began with an energetic set by renowned percussionist Jason Marsalis of the musical Marsalis family. That full set is now available as Jason Marsalis’s first ever live album, Jason Marsalis Live, out on Basin Street Records—the home of New Orleans best music—in digital format.

Jason Marsalis Live features the seasoned percussionist on vibes accompanied by Oscar Rossignoli on piano, Jasen Weaver on bass, and Gerald Watkins on drums, and finds the quartet playing a mix of new and old original material by Jason Marsalis. The Live album structures itself as a retrospective through Marsalis’s writing career working from most recent backwards. The opening tunes “Ratio Man Strikes Again,” “Passionate Dancer,” and “Bourbon Street Ain’t Mardi Gras” all come from his most recent release Melody Reimagined: book 1 an album comprised of contrafacts, songs composed using the chord progressions of existing songs, but with new melodies. “Ballet Class” comes from the critically acclaimed 2013 album In A World of Mallets, an album Mark Shapiro of DMX/Mood Media called “a candidate for record of the decade . . . a masterpiece.” The latter half of the album dives deeper into Marsalis’s discography featuring two tracks from his first two albums on Basin Street Records, “Short Story #1” from Music in Motion and “At The House, In Da Pocket” from The Year of the Drummer.

Jason Marsalis Live attests to Marsalis’s commitment to constantly grow as a musician. Despite early acknowledgement in his career as a “young phenom” and his status as a member of a family of musical royalty, Marsalis has kept his head down to progress his own career advancing from being an extremely talented genius drummer; expanding into a full-fledged mallet percussionist mastering vibraphone, xylophone, marimba, and other malleted instruments; to becoming an accomplished bandleader and thoughtful songwriter, while retaining all of his previous accolades.
Time will tell how Jason Marsalis will continue to grow and carve out his space in the annals of jazz history, but for the time being we can sit back and enjoy the music. Jason Marsalis Live is a vital step in that process.

Jason has gone through his own development, more or less outside of the almost royal status of his musical family. He has developed from an extremely talented drummer to a more than full-fledged percussionist with sticks on both the vibraphone, the xylophone, the marimba and similar instruments. A successful bandleader and composer, this album is an important step in his career.