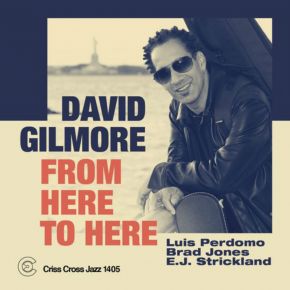 From Here To Here

The notion that nothing spurs the creative process like a deadline fully matches the back story of David Gilmore’s second album for Criss Cross, on which the 54-year-old guitar master navigates eight never-recorded compositions of both recent and older vintage, and a pair of well-wrought covers. “I had two months to write the music, so I was under the gun,” Gilmore says, before distinguishing From Here To Here with his label debut, Transitions (Criss-1393), for which he convened a crackling quintet to interpret repertoire by a cohort of recently deceased masters (Victor Bailey, Paul Bley, Bobby Hutcherson, Toots Thielemans, Woody Shaw, and iconic living elder Hermeto Pascoal). “I wanted to get a smaller working group in the studio to facilitate touring. My very first record Ritualism was centered around a guitar-piano-bass-drums quartet; I wanted to return to that format (a) because I like it, and (b) because of logistics.” The end result is an exceptionally vivid, varied date on which the leader showcases characteristically fluent chops, conceptual acumen and focused intention, matched by a rhythm section of New York first-callers. His primary soloistic foil is Luis Perdomo, himself a leader of four Criss Cross albums and pianist of choice for such avatars of Afro-Caribbean expression as David Sanchez and Miguel Zenon. “Luis is one of my all-time favorite pianists, one of the best out there,” Gilmore says. “He picks up things super-quick, he’s got great ideas, and harmonically and rhythmically he’s got it all covered.”

Quite a grown up CD! Superb music and craftmanship! Interplay reminds me of Jim Hall :)