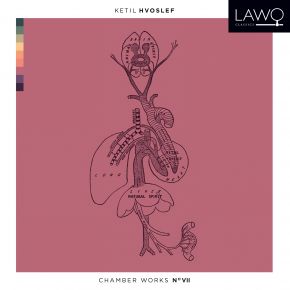 “Trio for Soprano, Alto and Piano” was written the same year as “Kvartoni” (LWC 1117), one of Hvoslef's early masterpieces. Not surprisingly, then, the two works are based on similar melodic material. Both compositions fit comfortably within Hvoslef's early production (by the time they were written Hvoslef had only been composing for ten years). The choice of ensemble (two female voices and piano) is very telling in regard to Hvoslef's musical ideals. We have two innocent and playful voices set against one of the largest and potentially most overpowering instruments. Hvoslef's love of contrast is, thus, readily served from the outset.

What on earth, you may ask, might trombones and string instruments have in common? They do share one property: they are unchallenged among musical instruments in their ability to produce continuous glissandos. String instruments, however, can cover a much larger range than trombones can.
In “String Quartet no. III”, large glissandos occur, collectively (the ensemble indeed functioning as a unified group) four times. In the third of these the gliss. changes direction at the end, presaging the end of the piece: an upward glissando preceded by a quagmire of small simultaneous slides at different speeds and in different directions.

Whereas the third string quartet appears to be music of the city, the “Sextet for Flute and Percussion” seems to take place in the jungle. As was the case in “Trio for Soprano, Alto and Piano”, the instrumental forces here are ostensibly right out of balance: a vulnerable flute (and occasional alto flute) against five potentially fierce and merciless percussionists. The latter (incarnated as a bass drum quartet and a timpanist) do, in the end, beat the flute into submission, rendering it “voiceless”: when the percussion finally recedes, we are left with the rhythmical sound of the flute's keys.