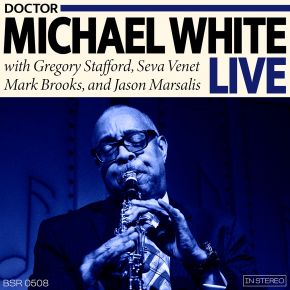 Just What the Doctor Ordered: Dr. Michael White Live
For nearly 45 years, Dr. Michael White has been bringing smiles to faces with his joy-filled, masterful clarinet-playing in the tradition of New Orleans jazz. May 5, 2017 was a special night in this storied career. In an evening celebrating Basin Street Records’ 20th anniversary, Dr. Michael White and his quartet (plus special guest Jason Marsalis) captivated an audience at the packed Little Gem Saloon with forty minutes of his mesmerizing performance. A Michael White show is more than a concert, it’s an experience. Like a siren in the sea, the first dulcet tones from White’s clarinet immediately draw the listener in; what ensues is nothing short of magic, a performance steeped in tradition—one that perhaps wouldn’t sound out of place in the very same venue in the 1920s—but full of luster and originality—something that makes you want to get up and dance. It may be “traditional” and “historical” but more apropos, it’s “electric” and “captivating.”

Dr. Michael White Live kicks off with the energetic “Canal Street Blues,” and segues straight into “I Love You Too Much To Ever Leave You” with the inimitable vocals of White’s long-time collaborator and trumpeter/vocalist, Gregory Stafford. White brings the audience to a warm island with “Caribbean Girl,” and the show only gets better from there. White brings fellow Basin Street labelmate, and resident prodigy Jason Marsalis to the drum set to accompany on the final two songs. A hush goes through the room, and more than a few jaws drop with the sultry rendition of the audience favorite and Gershwin classic, “Summertime.” White and his comrades leave nothing on the floor, wrapping up the set with the downright raucous “Give It Up / Gypsy Second Line,” a Michael White original.

If you were there, you witnessed a show for the ages; something you won’t ever forget. If not, you have a chance to experience a piece of what this special night entailed. Listen to Dr. Michael White Live now, and let yourself fall under his trance.

Dr. Michael White (artist)More information
Various (composer)More information
01-09-2020 Rootstime
"I have heard about Dr. White but I had never listened to an entire album, better late than never, take your chance, the man is a phenomenon!"