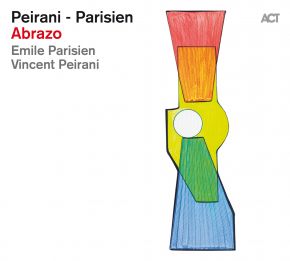 Six years ago – an age! – these two musicians, who had met four years earlier as members of the Daniel Humair Quartet, brought out their first recording as a duo, the aptly named “Belle Époque”. Music evoking the carefree mood of the Roaring Twenties. “Belle Époque” was so delightfully and irresistibly French! With “Abrazo”, five hundred entrancing and jubilant concerts later, the evidence points to a firm friendship. And the term abrazo takes on ist full meaning: the hug we share with good friends and also, in tango, the partners’ “embrace”. The word is to be taken in both senses: two free-reed instruments, free to howl or to murmur; two dancers moving with ease across a ballroom floor. Vincent Peirani and Émile Parisien grant themselves total freedom to approach, come close, or move away, to act as mirrors or turn around, to become the follower or take the leader’s part – but on one condition: there has to be an element of surprise, for oneself and for one’s partner. Nevertheless, the game is more important than the rule. Tango is their chosen field. But as accomplished jazzmen, it is clear that these two young musicians are not going to keep to an orthodox approach!

Of course, the sculptural forms of pieces by Astor Piazzolla are included, but they are presented as a suite: a transition piece written by Vincent Peirani (Between T’s) comes between one of the Argentinian master’s most ostensibly jazz compositions, Fuga y mysterio (a movement from his 1968 opera María de Buenos Aires), and Deus Xango, originally recorded by Piazzolla with Gerry Mulligan and sublimated since then by Joachim Kühn with Larry Coryell and Philip Catherine (“Twin House”).

Émile Parisien and Vincent Peirani have of course let their imaginations run free and the spirit of tango permeates their own compositions. For Émile, a Memento giddy with lyricism, and for Vincent an expansive and dazzling Nouchka and a repetitive, haunting, violent, furious F.T. (alias Funky Tango).
They have also ferreted out A Bebernos Los Vientos, a piece by Tomás Gubitsch, with whom Vincent Peirani has often played. Vincent had already borrowed his Travesuras for “Tandem” with Michael Wollny; and, more unexpectedly, a rarity by Xavier Cugat, Temptation, unearthed thanks to Michel Portal who vaguely remembered a tango by Xavier Cugat – the “King of Rumba” – heard in a film in which Cugat and his orchestra were playing for a dance number. On a train, Michel hummed the tune to Vincent and Émile, but he could not remember the title of the piece or of the film. The persistence of their research was to be rewarded!

The wager for “Abrazo”, which is illuminated by exchanges that are sometimes tender, sometimes feverish, and often both at once, was to play with the whole palette of arrangements. With all the parameters of nuance, reciprocal positioning, lyrical or rhythmic bias, sparse or fully orchestral accompaniment. From the introduction of The Crave to the coda of Army Dreamers, the ten pieces included represent as many shifting landscapes, brought together to form a masterfully coherent whole.

Clearly, The Crave, by Jelly Roll Morton picks up the thread from the end of season 1 and carries on the story of “Belle Époque”. But here it is infused with a Peruvian festejo rhythm that would undoubtedly have delighted the composer. Similarly, ending with the bittersweet waltz by Kate Bush, Army Dreamers, opens the door to other dances, other songs, other emotions. It Takes Two to Tango… Louis Armstrong sang it, Lester Young and Oscar Peterson recorded it. It takes two, so why not Vincent Peirani and Émile Parisien! They make us dance till we are giddy!