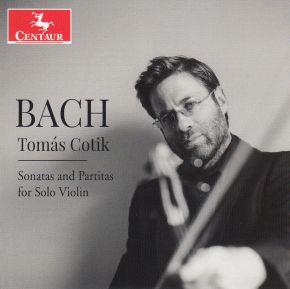 Sonatas and Partitas for Solo Violin

Gramophone:
On this two-disc set of Bach’s Solo Sonatas and Partitas, Tomás Cotik’s deeply analytical playing adds to an exhilarating display of the musical wonders the composer saw in the violin. Cotik allows the main lines of the music, their lyrical qualities and above all the overall arcs of each movement to be fully developed and even prioritised. As a result, several of the complete works seem to end in an anticlimactic sigh which in retrospect feels like a moving gesture of humility. Cotik also leaves the music almost completely unembellished, putting his faith in his command of phrasing, the variety he adds with the light, deft strokes of his Baroque bow and, above all, in the notes Bach wrote. His pure sound, perfect intonation and fast tempos mean that Bach’s fiendishly difficult challenges become more exposed, yet he never misses a beat.