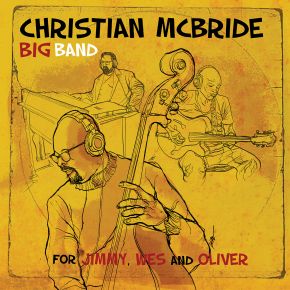 For Jimmy, Wes and Oliver

In September 1966, organist Jimmy Smith and guitarist Wes Montgomery got together at Rudy Van Gelder's famed studio in Englewood Cliffs, New Jersey. Over the course of three days, the two jazz icons recorded the material for two now-classic albums: The Dynamic Duo (1966) and Further Adventures of Jimmy and Wes (1968), backed by a big band featuring arrangements by the great Oliver Nelson.

That pair of electrifying outings would prove seminal for another dynamic duo over the ensuing decades: bass great Christian McBride and master organist Joey DeFrancesco would wear out the grooves on their copies of the Smith/Montgomery summit meetings during their high school days, and both would remain touchstones throughout a friendship and collaboration that has lasted nearly 40 years.

For Jimmy, Wes and Oliver echoes the format of the original Smith/ Montgomery summit meetings, with a balance of big band and quartet tracks. To complete the core band, McBride called on another longtime friend and collaborator, Mark Whitfield, to play the Montgomery role, while regular CMBB drummer Quincy Phillips anchors the ensemble.

Christian McBride (composer)More information
Christian McBride Big Band (orchestra)More information
16-10-2020 Jazzism
"In summary, this beautifully recorded session is a groovy, soulful and energetic record on which everyone gives him a good beat. McBride again shows on this CD that he is a bass player of exceptional class and who also knows how to write well and tastefully for big band."
06-10-2020 Rootstime
"McBride, Whitfield and above all the fantastic drummer Quincy Phillips and then the tight blowsection make this album a musical dream."
19-09-2020 Jazzenzo
"McBride manages to make the music sound fresh and all the classics are performed with passion. [...] It is not often that a CD of more than seventy minutes is so captivating from start to finish!"