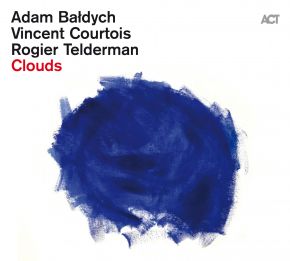 A Polish violinist, the pianist from the Netherlands and a cellist from Paris. Different countries. Different musical heritages. And the instrumentation of the classical piano trio. What is astonishing is that the compositions which all three brought for this recording, so different in mood, tempo and style, all sound as if they have been created by a single entity.

The title track 'Clouds' sets a reflective, personal and intimate tone from the beginning. Adam Bałdych, Rogier Telderman and Vincent Courtois have together made an album where there is quite remarkable emotional depth, a strain of melancholy, but one from which it is always possible to emerge, so the music also carries the idea of hopefulness and renewal within it. "When we were in the La Buissonne studios in the South of France," says Bałdych, "we got into the mood. We all wanted to make music that you can spend time with, where there are new layers to be found." All three players, who are bandleaders in their own right, have a desire to create flow, to keep the music moving forwards. And that is an aspect of the group's work that has appealed to critics on hearing the band live: "The music unfolded completely instinctively, over and over again," wrote Jazznu after a concert in Tilburg.

This trio of equals first came into existence in February 2018 when the director of the inaugural 'Sound of Europe Festival' in Breda gave Telderman carte blanche to form a new ensemble. The pianist chose to invite Bałdych and Courtois. "It was enjoyable right from the start," remembers the pianist. Following their first concert, it was clear that each of the members of the trio was thinking 'we should do this more often'. And then, as they proceeded to play concerts together, the mutual respect, the mutual listening, and the willingness to experiment grew.

Adam Bałdych, Rogier Telderman and Vincent Courtois combine and juxtapose very different sounds and heritages. And that is a central concept behind this trio. "Europe is different, every country is different," says Bałdych, "but music is a language which can bring us together, to one place." Violinist, cellist and pianist have combined here to find a range of expression that is both measured and exuberant. In 'Clouds' they have created magic, and the ultimate quality of all great music: the ability to call the listener back to enjoy its enfolding glories again and again.