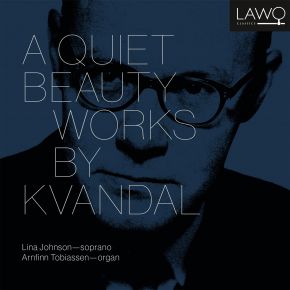 A Quiet Beauty - Works by Kvandal

KVANDAL AND THE CHURCH
There was a time in Norway when the position of organist was one of the most natural points of departure for a career as a professional musician. If one was interested in composing or writing texts about music, the post of church musician was a secure profession. Edvard Grieg had plans to become an organist while he was betrothed to his Nina in the 1860s. Church composers such as Knut Nystedt, Conrad Baden and Egil Hovland were organists, but also Klaus Egge and Edvard Fliflet Bræin received a comparable education. Arne Nordheim studied to be a church musician at the same time as Johan Kvandal, who graduated in 1951. Nordheim’s path led away from the organ gallery, but Kvandal found his place there, in Vålerengen Church in Oslo from 1959–1974. Although he was also a music critic, and a highly respected one for the newspapers Morgenposten and Aftenposten, he held on to his post as church musician.

Most of the works on this album were composed during the Vålerengen period, 1959—1974, though some came earlier, and some later. “Fantasi for orgel” (Fantasy for Organ) is one of his very last works, composed three years before his death. Here he decisively marks the end of his career on the organ bench, both with dissonant contemporary sounds and with strains of inspiration from the realm of traditional folk music. It is a finale worthy of this towering church composer.

How engaging were the religious texts for Kvandal? He used them regularly, also in church music not found on this recording. He said in an interview in Aftenposten in 1984 reprinted in the Festschrift, after having told of a week-long performance of Wagner’s Ring: “It became a kind of closing of the ring in me. Quite simply put, at this time I rediscovered my childhood faith and the wonder I felt at the forces in play governing our lives.”