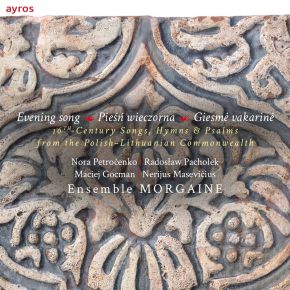 Artistic prodigy of Vilnius residents Alina Rotaru and Darius Stabinskas, ensemble MORGAINE is devoting themselves to the Late Renaissance and Early Baroque repertoire, and especially to the Golden Age of the Polish-Lithuanian-Commonwealth. The programme of their debut CD “Giesme wakarine | Pieśń wiecźorna | Evening song” is concentrated on the musical creation of Wacław z Szamotuł, Mikołaj Gomółka, Krzysztof Klabon and Cyprian Bazylik, with the original texts in Polish, as well as with their first translations into Lithuanian language which appeared in the 17th Century.