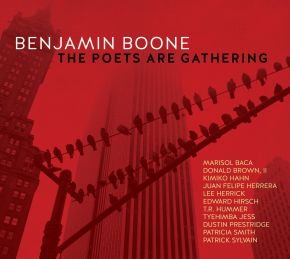 The Poets Are Gathering

“The Poets Are Gathering” is the third in a series of acclaimed recordings from saxophonist/composer Benjamin Boone that integrate the music & poems from some of America's leading jazz musicians and Poet Laureates, Guggenheim fellows and Pulitzer Prize winners. Where "The Poetry of Jazz" volumes offered the voice of the late U.S. Poet Laureate Philip Levine, here, notable contributors include Tyehimba Jess, Juan Felipe Herrera, Patricia Smith, T.R. Hummer, and Edward Hirsch, along with pianist Kenny Werner, guitarist Ben Monder and drummer Ari Hoenig, among many others. This recording possesses a visceral, in-the-moment force as the poetry responds to the roiling, insurgent energies against racism and other societal ills. The themes of immigration, racism, homelessness, poverty, abuse, protests, and war can overwhelm and distress, but through the voices of some of the world's great literary minds there are clues to be found to absorb the blows, summon the spirits, engage the moment and as Tyehimba Jess suggests, “murder the silence” that threatens to immobile us, to keep us away from the reasons to commit, to deal, to hope – and, above all, to imagine.