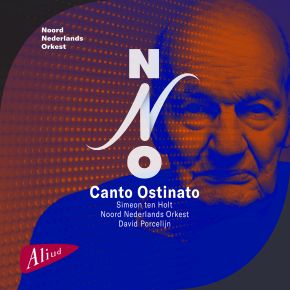 Simeon ten Holt was born in Bergen (The Netherlands) to painter Henri ten Holt en Catharina Maria Cox on the 24th of January 1923. After his initial studies in composition with Jacob van Domselaer he continued his education in 1949 at the École Normale de Musique de Paris with Arthus Honegger en Darius Milhaud. Ten Holt was not just a composer, as a writer he was published in the literary magazine “Raster”, performed regularly as a pianist and was seen as an integral part of the arts community in Bergen.

Concerts featuring Ten Holts music are often seen more as a total event where both the music and the public are engaged providing the experience where one piece to last hours. In his memoires Ten Holt stated “Also the concept of  ‘the longer the better’ is a mistake if the tension between the two points in time is missing. It’s then nothing more than a pointless repetition of the same.”  In the 1950’s Ten Holt composed “Bagatellen” and a number of pieces where his original concept of diagonal thought took form. This concept can be seen in works such as: Diagonaalmuziek (1956-1958), Diagonaalsuite (1957) and Diagonaalsonate (1959). Notable with these compositions is the use of complementary keys in a tritone relationship. This provided him the freedom to explore the juxtaposition of tonality and atonality.

Beginning in 1961 Ten Holt began to draw influence from serialism . Ten Holts’s composition method was interesting in it’s theoretical approach, a work was first conceived in it’s totality, similar to the formalism movement in the visual arts, and was then later translated to paper. In the 1970s Ten Holt abandoned this method and returned to composing at the piano It was in this period, after after years of work, his most popular composition Canto Ostinato was completed. Based on the same concept of repetition and tonality, in addition to Canto Ostinato, Ten Holt produced a number of extended piano works. He described these works in contrast to his earlier more formal works a mirror to his inner sole.