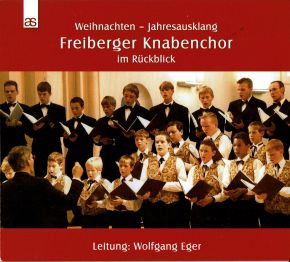 As one of the five boys‘ choirs in Saxony, the Freiberg Boys' Choir participates in a representative Saxon choral tradition. The release of this CD offers an opportunity to thank all of the former members of the choir who had invested immense amounts of their free time throughout the past decades for intensive work in concerts and rehearsals. The choir was founded and directed by Wolfgang Eger, in 2011 it was taken over by Andreas Reuter until it’s dissolution in 2017.

The present audio recordings originate from live-recordings and recordings for radio and television throughout the years 2000 to 2010, and they provide an insight into the extensive concert activities of the Freiberg Boys‘ Choir throughout its mere 24-years of existence.

Concerts at home and abroad, in the various federal states, and several times in the Czech Republic and Poland, Austria, Switzerland, the Netherlands and France (including Notre-Dame in Paris), TV recordings for the Second German Television (ZDF) and for the ‘Mitteldeutschen Rundfunk‘ (MDR) as well as radio and CD recordings were included. The Freiberg Boys' Choir was involved in many productions at the Mittelsächsischen Theater in Freiberg, including the operas "Der Wildschütz", "Hansel and Gretel", "Carmen" and the Christmas opera "Christ-Elflein". The boys' choir performed regularly with the orchestras (as well as members of): the Staatskapelle Dresden, the Robert Schumann Philharmonic in Chemnitz, and the Central Saxon Philharmonic. There were a number of joint appearances with the opera singer and entertainer Gunther Emmerlich.

The highlights of their concert activities included the annual Christmas and New Year's Eve concerts and the final concert of the Gottfried Silbermann Days in 2005 at the Freiberg Cathedral. In 2004, the Freiberg Boys Choir was awarded the Freiberg Prize for the Advancement of the Arts. For some of the boys who sang in the choir, the Freiberg Boys’ Choir provided the basis for later admission into the Dresden Kreuzchor, the St. Thomas Choir, or for a professional musical career as a singer or member of an ensemble.

Everyone who was accepted into the boys' choir received a solid musical education and was granted access to traditional classical music - from the old masters such as Heinrich Schütz, Johann Sebastian Bach, and Wolfgang Amadé Mozart, to modern works, spirituals or gospel music. At the beginning of 2011, Wolfgang Eger retired from his role as the director of the Freiberg Boys’ Choir due to advancing age. Andreas Reuter was his successor until 2017. In the same year, the Freiberg Music School ended the sponsorship of the boys' choir, thereby dissolving it.