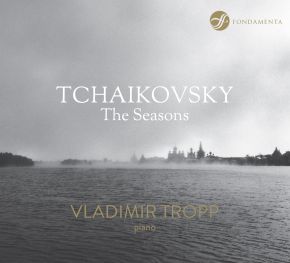 The Seasons, whose entire cycle is rarely recorded, provides striking testimony to Tchaikovsky’s genius. In 1876, Nuvellist, a monthly magazine published in Saint Petersburg, commissioned Tchaikovsky to compose a piece for each issue. The result was twelve pieces, one for each month of the year, whose titles and epigraphs were drawn from the Russian poetry suggested by the editor. Each piece was inspired by nature and scenes of Russian life of the times. They come together in an extraordinary fresco, an allegory of the cycle of human life.

Vladimir Tropp, born in 1939, is one of the last representatives of the great Russian school of piano. He has been teaching at the Tchaikovsky Conservatory and the Gnessin Russian Academy of Music in Moscow, where he heads the piano department, since 1963. Here he gives us a new interpretation of The Seasons, which he had already recorded with Denon in 1995 and which, together with the record by the great Konstantin Igumnov, has set a standard for the work. The two Nocturnes that are included here add a further dimension of poetry and beauty.