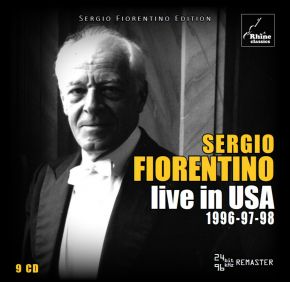 Sergio Fiorentino was one of the greatest pianists I have ever heard. I realize that this is a big statement, especially since my listening and loving pianists over a period of over half a century. I heard Backhaus, Cherkassky, Kapell, Landowska, Moiseiwitsch, Schnabel and Solomon. I knew Horowitz personally. And I introduced to America in their debut recitals such pianistic luminaries as Bella Davidovich, Andrei Gavrilov, JeanPhilippe Collard, Mikhail Pletnev, Igor Zhukov, Ekaterina Novitskaya, Maria João Pires, Andrea Lucchesini and more than twenty others. I returned to America after absences of many decades such artist as Maria Tipo, Magda Tagliaferro, Dubravka Tomšič, Vlado Perlemuter and Dame Moura Lympany. But it was Sergio Fiorentino’s return after forty odd years of first playing in New York City that brought me the greatest satisfaction and moved me deeply… Sergio was immediately loved by Newport and New York audiences. Critics from Boston and New York wrote that his was a throwback to the golden age of Lhevinne, Godowsky and Rachmaninoff himself. Sergio was generous with his time, his artistry and his concern for others. His fellow artists at the Festival revered him; one seasoned pianist even wanted to travel to Naples for further study with him. He was an impresario’s dream: always playing like a god with no hidden agenda of personal difficulties. His needs were simple: a light meal and a glass of Coke. He was impeccably dressed even though his concert suit spanned the decades. The Festival made him a gift of a new set of tails; he accepted it graciously, and it is now a poignant reminder that he played his very last recital in that new suit. As a matter of fact, the very last piece he played in public was at the Newport Music Festival --- Beethoven’s Sonata Op.26, prophetically containing the “Marcia funebre sulla morte d’un eroe.” For me, Sergio was that “hero”. He will be forever missed and never forgotten.