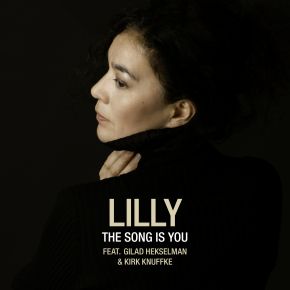 The Song is You

Interpreting the standards from the Great American Songbook is considered by many to be the supreme discipline in jazz. Anyone who dares to sing songs like “My Foolish Heart” by Victor Young and Ned Washington, “It Might As Well Be Spring” by Richard Rodgers and Oscar Hammerstein or “Prelude to a Kiss” by Duke Ellington automatically exposes himself or herself to the comparison with hundreds of performers who have already sung them.

For the Danish jazz singer Lilly – full name Lilly-Ann Hertzman – they also are part of her musical DNA. “I love these songs; they speak to me,” she said with enthusiasm. “I have been listening to and singing jazz since I was a teenager, so I am very familiar with these songs. I mostly only sang my own songs on my first three albums. But it was completely natural for me to sing these other songs now.”
She already did this on her previous album “Tenderly”, in a duet with the Israeli-American guitarist Gilad Hekselman. The album received euphoric reactions. For Lilly, this was a reason to dare something similar without repeating herself. This time, Kirk Knuffke joined the tried-and-tested duet of singer and guitarist. The American cornet player brings an additional tone quality into play.

“The entire album was recorded in New York on one day; it was very spontaneous,” the singer stated with obvious pleasure. “Of course, I was very happy to be able to record with Gilad and Kirk.”
Three years ago, she had a joint performance with the cornetist at the Copenhagen Jazz Festival and has kept him and his special tone in mind since then. Lilly also finds enthusiastic words for her other musical partner, who is so much more than just a companion, but instead a creator on equal terms.

“Gilad is a wonderful person and also one of the best musicians I have ever played with," she stated. “He makes everything so easy for me. He is very open-minded, but has both feet on the ground. “Let's see what happens” is his attitude, and I share it. He makes me sing better because I can relax with him.”

In addition to nine standards, Lilly's own song “Five Wild Geese” made it onto the album, about whose title and title track the singer was particularly concerned. It is not without reason at the end of the album. “I tried to find a common framework for the songs that made it onto the album,” Lilly said, “and then I decided on the album title 'The Song Is You’. It expresses the spirit of that day for me.”
The song by Jerome Kern and Oscar Hammerstein is of course a love song. “To show your love to another person requires courage,” Lilly said. “That's my interpretation of the song.”

But she also finds other levels of interpretation of this song, which has been close to her heart for quite some time. “At the same time, you can also emphasize the ‘You’ from ‘The Song Is You’,” Lilly explained. “It's not about ego, but about following your heart and dreams. You also have to love yourself and be honest if you really want to love.”

And finally, the song expresses something a lot deeper for Lilly. “The title ‘The Song Is You’ is also about what musicians and singers do when they interpret a song,” the singer explained. “The moment you sing or play a song, you become that song. At least that's what I'm interested in. I want to interpret a story and make it my own. I completely blank out who else recorded this song.”
The sensitive and sometimes surprising interpretations that Lilly and her two companions have succeeded in creating here would easily withstand some comparison, but that wouldn’t be something that Lilly considers important. For her, something completely different is in the foreground. “We were very relaxed in the studio and had fun,” she said with pleasure, “and that's what it's all about. Be yourself!”

Lilly (artist)More information
Various (composer)More information
Gilad Hekselman (featured)More information
Kirk Knuffke (featured)More information
13-04-2021 Bayerischer Rundfunk
"Charming, fresh and airy, but also profound and full of delicate power, that's how the music of Lilly..."
26-03-2021 GAFFA
"... Lilly-Ann Hertzman has an incredibly good and seemingly natural grip on the songs/ballads. It's as if they are part of her own musical DNA..."
26-03-2021 Musikansich
"... All songs have in common that the protagonist conveys a strong emotional impression through her very sensitive voice, very personally marked. And this is particularly evident in the original composition "Five Wild Geese"..."
26-03-2021 Jazz-Fun
"... jazz-fun.de says:
Lilly uses musical language in an extremely delicate way, not imposing her version of the story, but using the magic of mood and climate. The album offers us a variety of jazz experiences on a very high artistic level..."

23-03-2021 Jazzthing
"... Lilly, aka Lilly-Ann Hertzman, succeeds in this, her versions present h themselves as artistic with a personal expression. Therefore, her interpretations offer an emotionally deep, truthful view, due to which these standards thus become her own songs."