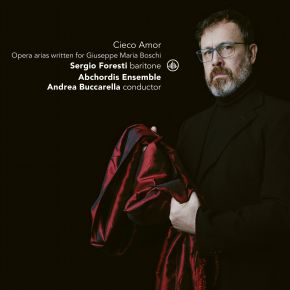 Giuseppe Maria Boschi was undoubtably one of the most famous and virtuosic baritones of the 18th century. He had a brilliant and intense career on a par with those of renowned contemporary castrati and sopranos, including Farinelli, Senesino, Faustina Bordoni, Margherita Durastanti, Francesca Cuzzoni and Nicolini. He was one of the leading baritones throughout London from 1720 to 1728, sought after by Georg Frederich Händel, Giovanni Bononcini, and Attilio Ariosti. Warrior, father, lover, tyrant: many were the roles to show the nuances of his vocality which, judging by the music written for him, was of exceptional range and well-suited for dramatic roles.
The program of this recording made in honor of Giuseppe Maria Boschi is largely unpublished and constitutes a very small selection of some of the most beautiful pages of music written for him between 1708 and 1728.

Sergio Foresti: Nowadays, baroque music is often perceived merely as light, cheerful music. This image is superficial when you consider the abundant variety of the 83 roles written specifically for Giuseppe Maria Boschi. He was indeed a great singer, working with the greatest voices and composers of his time. His voice, his technique, and his ability to express drama in music must all have been spectacular.
This is, above all, theater music. The arias of this program are expressions of interior states of mind. The words have a meaning, as do the ways in which they are set to music by the various composers. The singer had to convey these meanings and add their own ornaments to the music. I have done my best to honor this great tradition.

Sergio Foresti highlights the versatility both of Boschi’s musicianship and his own technique, through this selection of operatic arias by ten composers altogether....Overall, this release provides a valuable insight into the abilities of, respectively, a historic and a contemporary singer.

"
03-01-2022 Ritmo
"The selection [of arias]... have as a common denominator both the high musical quality and the vocal demands. Foresti's interpretation has two virtues, technically it is almost flawless (especially in coloraturas) and faithfully expresses the text and the affection of each of the very different roles he plays. A highly interesting recording."
15-12-2021 Opus Klassiek
"
The pleasure with which I listened to this recital is closely related to the singing of Sergio Foresti..... Another positive point is the varied composition with lyrical and contemplative moments, attractively dosed between the vocal and instrumental fireworks..... Bravo!
"
01-12-2021 Opera Magazine
"

"
01-09-2021 American Record Guide
"He sings it extremely well and there aren't a lot of singers who can handle the vocal challenges and the dramatic ones as well. In addition, his diction and projection of the different characters is very sharp and detailed. The Abchordis Ensemble conducted by Andrea Buccarella offers colorful, forceful support. It's clear that all enjoyed creating this together. The sound is warm and crisp with enough space around Foresti's voice."
07-08-2021 Toccata
"Sergio Foresti impressively portrays the imperious warrior, the vengeful father or the longing lover. With his robust and very flexible baritone voices, he effortlessly creates cascading coloratura as well as quieter, elegiac passages with great stylistic confidence, stage presence and drama. It's just amazing how - theatrical in the best sense of the word - Foresti gives his characters credibility. The Abchordis Ensemble, led by harpsichordist Andrea Buccarella, is also really letting itslef go and knows how to fill its part with rich contrasts and differentiation. With its unbridled temperament and passion, this is the ideal partner for the confident Sergio Foresti. A musical rollercoaster of emotions!
"

13-07-2021 Presto
"Foresti sounds energetic, lively. His voice is firm and clear. Its color is mixed with strength and delicacy. He creates unique and often contrasting interpretations. At times it is moving, then again noble, and then it is blunt.  His voice has a rich expressive palette and his interpretations are emotional and well thought out at the same time. This is an example of baroque virtuosity at the highest level."
01-07-2021 Gramophone
"Sergio Foresti and Abchordis Ensemble's intelligent selection navigates a course through contrasting instrumentations, keys, moods and composers."
01-07-2021 BBC Music Magazine
"Foresti strides majestically across his register, dispatching ringing top notes; in passages of coloratura, he's as reckless as a racing driver."