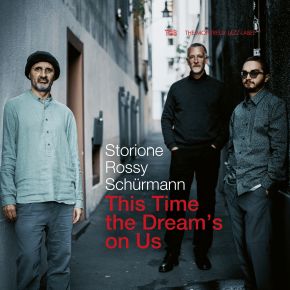 This Time the Dream's on Us

"This Time the Dream’s on Me" is the name of Harold Arlen's 1941 song, which made it into the charts twice in the same year with none other than Glenn Miller and Woody Herman. It was composed for the film "Blues in the Night" with lyrics written by the famous singer and songwriter Johnny Mercer. Ella sang it especially tenderly, including it in her two Arlen and Mercer songbooks. It has been covered by many other great artists over the years, from Bird to Miles.

And now we have a technically stupendous pianist at the relatively young age of 27, a classic jazz trio and an album title referring to the Great American Songbook. What could go wrong? The temptation, especially with young jazz musicians (less often with female artists), is well known: to dazzlingly display their instrumental skills over a traditional framework, like a gymnast vigorously working out on the high bar. Unfortunately, the dismount often ends up, despite their virtuosity, stumbling into the mainstream of mediocrity.

Pianist Yuri Storione excels in this endeavour by teaming up with two experienced musicians: the deliberate, steady and precise bassist Dominik Schürmann, and one of the world's best drummers, Jorge Rossy. The balance between the players is already expressed in the trio’s name. Apart from the Arlen tune, another milestone in jazz history, Thelonious Monk's "Ruby My Dear" is the only other work from the Great American Songbook. The remaining ten compositions are Storione’s and Schürmann's own creations – consistently melodic and, in their creative interplay

brilliantly accented music — all of which reward the attentive listener with music that avoids all superficial gimmickry.

The bass is strikingly elegant: Dominik Schürmann is a team player who, from soulful ballads to up-tempo tunes, maintains a clear, reliable beat and a gentle touch. He creates stirring melodic lines that contrast with the piano, and short solos that are as honest as they are clean and inspired. Jorge Rossy’s contribution is an amazingly responsive, imaginative and sensitive drumming: it orders and underlines, decisively shapes, and in a restrained but effective manner accompanies his partners’ solistic excursions. This, like his entire presence here, is truly invaluable.

Within this flexible framework, where both of these stimulating and well-grounded musicians know how to let their vast experience flow fully into each musical moment, Yuri Storione's pianistic exuberance can wholly unfold, blossoming in all its splendor.

What were the last lines of the Mercer lyric? "It can't be true, but / This time the dream's on me." The Storione-Rossy-Schürmann Trio playfully twists and turns this dream. Without bombast and without hesitation, it transforms it in the most satisfying way: directly, easily, with depth and drive, into the reality of a surprising and captivating music: Yes, it can be true.

What a super cd, this is real jazz, compliment on the trio, also the producing team great soundstage.