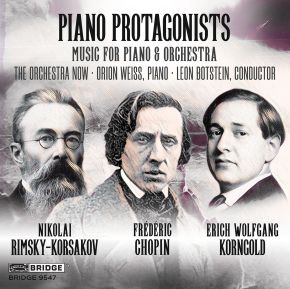 This new studio recording contains three works for piano and orchestra that virtuoso pianist Orion Weiss and conductor Leon Botstein first performed in concert at the Bard Music Festival.  Together, the three works span almost a century of musical Romanticism and are as different from one another as the generations they represent.  In each piece, the virtuoso genre becomes a means by which the composer responds to a specific source of inspiration—in the first case (Korngold), a performer and family friend who had suffered a horrendous tragedy, in the second (Rimsky Korsakov), a venerated old master, and in the third (Chopin) a melody from a beloved opera.