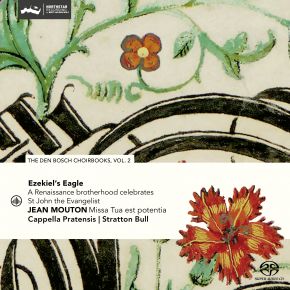 At the dawn of the Renaissance the southern Dutch city of ’s-Hertogenbosch, with its abundance of churches and monasteries, was also referred to as “Little Rome”. Central to this religious scene was the Brotherhood of Our Illustrious Lady (Illustre Lieve Vrouwe Broederschap), founded in 1318. This devotional organization, which counted among its members the famous painter Hieronymus Bosch, invested considerably in recruiting and employing the best singers and organists for its chapel, which performed a wide variety of polyphonic music. No fewer than nine choirbooks with this repertoire are still preserved by the confraternity. After centuries of silence, this magnificent collection is finally sounding once again. With the five-year project The Den Bosch Choirbooks (2020-24), Cappella Pratensis, itself based in ’s-Hertogenbosch, is giving these manuscripts the attention they deserve. The project includes numerous concerts, workshops, publications, lectures and a series of five CDs. This recording thus invites listeners to imagine themselves among the confraternity members gathered in their chapel in the church of St John the Evangelist in ’s-Hertogenbosch on a sunny spring day. It is May 6, the great feast of St John Before the Latin Gate that commemorates the attempted martyrdom of the Evangelist in 92 AD.

This may well be the first recording of the Missa Tua est potentia by Mouton, but even if it has been recorded before, its performance as part of a liturgical framework makes this recording something no lover of renaissance polyphony should miss.

"
01-01-2022 Fanfare
"For anyone interested in Renaissance music this is a welcome acquisition. Listening to the liturgy unfold as it might have done in 16th century ‘s-Hertogensbosch is illuminating from a historical perspective, and the performances are first-rate."
21-12-2021 De Volkskrant
"

The lush polyphony is performed festively and with great conviction.

He restores here with perfect transparency a counterpoint of exceptional density, which does not eschew
dissonances (Kyrie), and the sometimes tortuous melodic designs.

"
15-07-2021 Gramophone
"Cappella Pratensis’s homogeneity of timbre is impressive, especially in view of the many different registers in play. The cast is well matched from top to bottom in both the Mass and the motets. Taken as a whole, the latter make the more convincing impression (in the Gloria some of the choices of pitch may surprise), but the final sections of the Mass are the core of the experience, as they are in the liturgy. And the chant never plays second fiddle to the polyphony; the fact that it is rhythmicised is a further twist, which only adds to the project’s distinctiveness. "
15-07-2021 Luister
"
The balance is good, the can sound is pleasant and absolutely convincing.
"
13-07-2021 Gramophone
"Cappella Pratensis prove themselves to be an ensemble of exquisite skill, voices steeped in both artistry and personality, Jean Mouton’s music shaped and sung superbly."