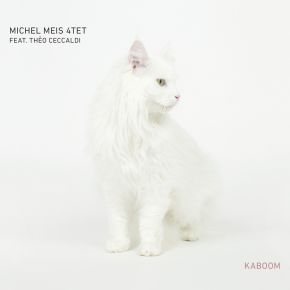 “Kaboom” Behind this picturesque title lies the explosive mixture created by the 4tet of the Luxembourg drummer Michel Meis on his second album. This time the band has a guest on some of the songs: the French violinist Théo Ceccaldi.
“Théo Ceccaldi was brought to my attention by our pianist Cédric Hanriot,” Meis said. “His music and attitude really appealed to me. There is a lot of space between the violin and the trombone in terms of sound, which was a very experimental approach. Musically, it fit very well, because both are very flexible.”
Alisa Klein on the trombone merges as casually as unpredictably with the violin tone of Ceccaldi, and band leader Meis knows very well how much she is worth for the band. “Alisa Klein is the soul of the band,” a fact of which he is very aware. “Her sound is very warm and emotional and has a lot of space, but it still sounds very intimate. Such a deep-sounding wind instrument sound totally appeals to me.”
The well-structured pieces of the band leader have exactly the right mix of eclectic modern jazz and improvisational desire for experimenting. Meis can rely on his 4tet, which has grown into an unbeatable unity since the debut album “Lost in Translation”, which received excellent reviews. “No member of the band can be replaced and it would significantly affect the sound if one were missing,” Michel Meis stated.
Stephan Goldbach is on the bass, and he also plays in the Trio Village Zone of pianist Georg Ruby, for example. “Stephan also plays a lot of experimental music,” Meis knows. “For me, he's the punk attitude in the band. He is the base of the band. But he brings a lot of physical strength to the band and plays in a very solo-like manner.”
The 4tet is held together by the French pianist Cédric Hanriot. “Cédric Hanriot is a pianist the kind of which I haven’t heard many times in my life,” Meis said. “He has his Cédric moments, during which I recognize him immediately, but his solos are always surprising because he doesn't hesitate to leave his comfort zone. He always takes substantial risks, and we adapt to them.”
Between the longer pieces, Meis has included small miniatures on “Kaboom” where two musicians usually ester into conversation. However, the album is opened by the impetuous “Full Pedal Jacket”, which explores the abundance of possibilities in just under nine minutes that the 4tet and its guest have at their disposal. “’Full Pedal Jacket’ tends to go in the pop direction,” Meis believes. “It’s based on a riff that I experimented with.”
The whole band joined together to play “State of Uncertainty” which shifts between edgy rhythms and small melodic treats. “I wrote the piece during the first lockdown,” Meis recounted. “The beat is repeatedly broken up, whereby the piece is intended to describe the prevailing uncertainty.”
“She”, which is led into by “Coming Together”, is a ballad Meis wrote especially for Alisa Klein. Here, the 4tet is in its natural habitat and can play out all its lyrical strength.
The title song is a tour de force, in which the 4tet and its guest glide through an unprecedented variety of styles; the band simply bursts with energy and joy of playing. “’Kaboom’ combines all the styles I deal with,” band leader Meis summarized briefly and concisely, “hence the explosive title.”
"The album ends with the more quiet number “Re:build”, which nevertheless covers a large dynamic range. “’Re:Build’ is a commissioned composition about the economic and social reconstruction of destroyed Luxembourg after the Second World War" Meis stated. “I tried to portray this through substantial silence. The piece keeps going up and down dynamically.”
The white cat on the cover also has some significance, because it illustrates what is also the hallmark of the Michel Meis 4tet: “Cats do what they want and have a mind of their own,” Meis knows.

30-05-2021 Jazz-Fun
"jazz-fun.de says:
Kaboom is an album of contemplation, improvisational art and large spaces. Musicality, unique approach to music, sensitivity of soloists are the great assets of this album. Highly recommended."

26-05-2021 Jazzthing
"... But the center is above all the flirt with changing forms of energy, bound in the jazz setting, but carried by the crossover of attitudes. Meis can do that, Ceccaldi too, matching the force of his violin to the esprit of the vehemence. Together with the quartet, this results in a mixture rich in contrasts, melodic, chamber-jazz modern and fierce at the same time...."
26-05-2021 Latins de jazz
"... Just like the feline, the quartet allows itself the freedom to do what it wants... a luminous music with an unheard-of singularity that is both disorienting and delightful to the ear...