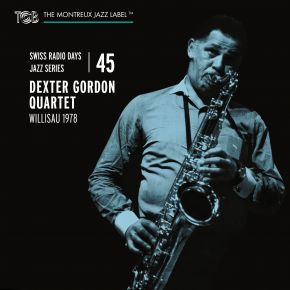 In Willisau in 1978, Dexter is in a very happy period. Columbia signs the prodigal tenor resulting in the significant successes “Sophisticated Giant” and “Manhattan Symphony”, together with a rhythm section that Dexter then tours on club stages across the country. From this rich and sustained collaboration is born an incomparable musical osmosis, which makes the saxophonist's quartet of that time an authentic musical ark. It’s consequently this group, exquisitely road tight and brimming with desire to play, which arrives in Willisau in 1978, a year which sees Dexter awarded “Musician of the Year” by Down Beat magazine, and two years before being inducted into the renowned “Jazz Hall of Fame”. And since Dexter is not the type to let the flow of music unfold without fueling it with endless proposals for his partners, he knows he can rely on and lean luxuriously on the Cables – Reid – Gladden triplets, a trio synonymous with 24-karat! And if we had a mini-doubt concerning the pleasure that Dexter takes playing that night, we only have to let ourselves be carried away by his muscular and intoxicating dialogue, which is particularly riddled with famous quotes, as enjoyable as they are occasionally unexpected. Like the boppers, Dexter has always adored the nod granted by a well-placed melodic quote, which he uses either in relation to a neighboring harmonic sequence which lends itself to it, or in a textual relation with the lyrics of the song he quotes! For the repertoire of the day’s concert, our favorite tenor takes no prisoners! It's meat from start to finish, with themes that are practically tattooed on the soul of this exceptional performer.
Recorded live at Hotel Mohren, Willisau, March 4, 1978
Recording engineer: Walter Troxler
Digital editing & mastering: Blaise Favre