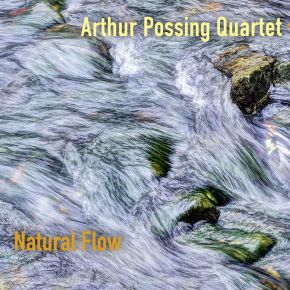 “Natural Flow” is the name of the second album by Luxembourgian pianist Arthur Possing with his quartet, and the album title of course also defines the sound ideal of the band. It has existed since 2013, so it had enough time to develop the natural flow that characterizes the eleven songs on the successor to “Four Years”. Together with his compatriot Niels Engel on drums, the German bassist Sebastian Flach and the French saxophonist Pierre Cocq-Amann, Possing plays a warm modern jazz on “Natural Flow”, which is sophisticated, versatile and exciting. The four got to know each other in the Luxembourg jazz scene, and the French trumpeter and flugelhorn player Thomas Mayade is also a guest on four songs.
“Together, we embody exactly the sound I imagined,” Possing said. “As a pianist, the standard formation is the trio, but I always wanted a saxophone to play the melodies. I realized when composing that it would be better if another instrument played the melodies.”

Possing cannot praise his partner in melody leadership and structure enough. “Pierre can play a note and it touches you directly,” according to the pianist. “It's not about the number of notes, but about the way he plays a note. Whether on the soprano or the tenor, he has an attitude of how he presents emotions that is unique. I'm very glad I have him playing alongside me.”
Possing also found just the right companion for the position on the bass. “It's the round sound of Sebastian,” the pianist stated enthusiastically. “When he plays double bass, you immediately feel the fullness of his sound. He is very focused on the sound he plays and on the whole band at the same time. In addition, he plays very melodically. He gives the whole band a feeling of security, and that's actually the most important thing.”

And then there’s the man on the drums. “Niels plays drums as I imagine you play drums," Possing observed. “He is very versatile, because he is active in many different projects, like all the musicians in the band, and is at home in many different genres. He always finds the right grooves for the respective pieces and plays very freely and carefree. Sometimes he makes small interjections that deviate from the actual groove and are very interesting and inspiring. They often take the piece in a new direction.”
Thomas Mayade adds an extra dimension to the sound of the band in four pieces. “I met Thomas in Brussels, but he actually comes from France,” Possing said. “I had composed a few pieces, in which I wanted to have a trumpet or a flugelhorn playing with the band and I immediately thought of him. He combines traditional with more modern ways of playing and that fits exactly.”
The eleven songs were mainly composed by the band leader, while some songs were also composed by other band members, including the most intense, “Le Roi Arthur”, by Cocq-Amann. “Last year he called me and told me that he composed a song for me; that was ‘Le Roi Arthur’," Possing remembered. “The piece not only reflects my musical world, but also fits perfectly into the quartet. Of course, it also demonstrates his background and reminds you of John Coltrane without being a pale copy of his playing. It is in 7/4 time and consequently has a more modern approach that was not common at the time. At the same time, it is mixed with this energy.”
Relaxed rhythmic complexity distinguishes “One Move Further”. “'One Move Further” is based on a rhythmic idea that Sebastian and I play together,” the pianist explained. “A melodic idea develops from this, which is anticipated by the rhythm – hence the title.”
The enchanting “Walk Around Etangs” shows another side of the band. “‘Walk Around Etangs’ refers to my time in Brussels, where I studied,” Possing explained. “’Etangs’ is the French word for ponds, and I often went for walks along the ponds in my district.”
"Golden Fields” is also among the particularly impressive songs. “That was one of the first pieces I composed for the album,” Possing remembers. “The influence of Brad Mehldau can be heard quite clearly there. I composed the piece after I saw a concert by him with his trio in Luxembourg. He embodies an aesthetic that is very close to me and that I find very important – without wanting to compare myself to him now.”

19-08-2021 Luxemburger Wort
"... The quartet's repertoire consists of their own compositions, but also of pieces by jazz musicians they hold in high esteem. This mixture reveals a modern, melodic jazz with influences from all genres,
without forgetting the tradition..."

11-08-2021 Telecran
"More complex, but not more complicated. Arthur Possing is a young, up-and-coming jazz pianist. With his quartet he releases his second album..."