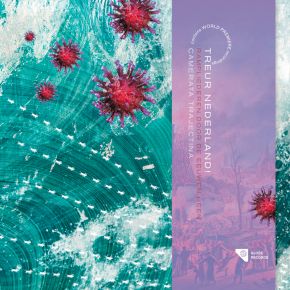 When people are affected by a disaster, they often seek comfort. There is a long tradition of disaster songs: by singing together people sought support from each other.

Lotte Jensen (Professor of Dutch Cultural and Literary History at Radboud University in Nijmegen) investigates the emotional impact of disasters and the creation of a national identity in the Netherlands and came across songs about fires, floods, drought and insect plagues. Camerata Trajectina brings this tradition of the Dutch disaster song to life.

About the plague and corona, about the St. Elizabeth’s Flood in 1421 and the Flood of 1953: singing about disasters is timeless. Camerata Trajectina has made a fascinating overview, from devotional lyrics to psalm melodies but also cabaret-like songs from the 1920s. An expressive melodrama by Hendrik Badings and mesmerizing chorales from the Evangelische Liedbundel from 1806.

The functions of these lyrics are diverse; to evoke awareness of sin or as a news outlet, for youth education or for fundraising. This album shows how people in the Netherlands dealt with major disasters and what a comforting and connecting role music played in this.

Camerata Trajectina (artist)More information
Various (composer)More information
20-01-2022 Het Parool
"
Camerata Trajectina takes us through centuries of national misery. The album is, as always, beautifully designed, with all the old Dutch lyrics sung in the booklet.
"
01-12-2021 Nieuwe Muze
"
Thanks to an ingenious coordination of polyphonic and monophonic settings, the music remains captivating from start to finish.
"
15-10-2021 Luister
"
8/10 Anyone looking for authentic Dutch misery will find joy at Camerata Trajectina
"
13-08-2021 Mania
"
To start with: what a beautiful digipack! Musically it's all fine and then the chosen subject is also delicious
"